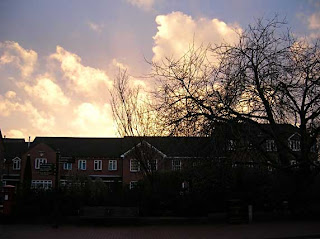 There was a beautiful sky as I came down Bird Street about an hour ago; a shame it was behind the Lichfield branch of pizza joint Ask instead of the cathedral, but I suppose you can't have everything...

Word of the Week: Curtain Lecture

A reproof given by a wife to her husband in bed.

She ought to exert the authority of the curtain-lecture, and, if she finds him of a rebellious disposition, to tame him.
- Addison. 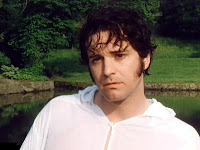 Speaking as someone who once got banned from the BBC History forum (how is it my fault if everyone wants to flame each other over Regency House Party??) - I'm glad the BBC is dropping Regency costume drama. I love Jane Austen's works, but some of these latest dramas have become a grotesque breeches'n'bonnets parody which, despite my enthusiasm for literature, I can hardly be bothered to watch these days. Whatever happened to Austen's gloriously catty voice? Her unsentimental opinions?

I'm also pretty fed up of Andrew Davies' reputation for raunchiness - something that he himself seemed fed up with at least eight years ago when I saw him address the University of Warwick writing group; he complained about 'that picture of Colin Firth in a wet shirt' and seeing it pinned to the kitchen cupboards of 'women of a certain age'. Amazing that, in his BBC adaptation of John Cleland's Fanny Hill, he actually went the other way and turned a work of eroticism into cosy teatime drama!

When it came out in 2007 I tried in vain to get to see Kenneth Branagh’s film version of The Magic Flute, so I was thrilled this Christmas to be given the film on DVD. I was intrigued to know what Branagh - who admits to being a total opera novice – made of it.

While it wasn't a disappointment exactly, it turned out to be a deeply flawed adaptation, though Stephen Fry’s jaunty libretto seemed to hit the mark. Leaving aside the difficulty of trying to translate a static artform like opera into something cinematic, Branagh makes the odd decision to shift the opera into a place resembling the World War I trenches. He wants the piece to be about war, while Mozart and librettist Emanuel Schikaneder were clearly writing about Freemasonry and Enlightenment values. I felt he was straining to make the metaphor work, and the horrors of the trenches seemed an uncomfortable backdrop for an opera that includes pantomime foolery.

That’s not to say the music lacks any power; the cast are almost uniformly excellent. Rene Pape is a commanding Sarastro, while Joseph Kaiser and Amy Carson as the lovers, Tamino and Pamina, acquitted themselves well. Lyubov Petrova gets a memorable entrance atop a tank as the Queen of the Night, and her vocal set-pieces are incredibly visceral (though Branagh almost doesn’t know what to do with the camera during Der Hölle Rache). It was a terrible decision to rely so heavily on computer graphics throughout, which, instead of creating magic, frequently dehumanise the piece. At times I felt like I was playing some sort of opera game on a Wii.

Yet for all my complaints, I was entertained. Unlike Ingmar Bergman in his 1975 film adaptation, Branagh doesn't try to ignore the problems inherent in filming opera; the result may not always have worked, but it was certainly never dull. 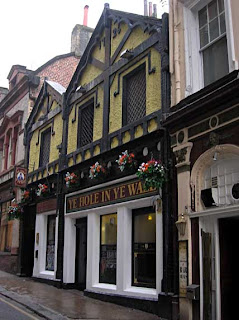 Continuing our Liverpool journey we departed from the guide book to take some refreshments at the city's oldest pub, Ye Hole in Ye Wall (above).

Standing just off Dale Street in Hackins Hey - one of Liverpool's narrow medieval streets - the frontage certainly looks old (it was built in 1726), but unfortunately the interior has clearly gone through so many changes that there's not much of a Georgian feel to it (it's certainly nothing like Ye Olde Cheshire Cheese in London, which feels like a proper 18th-century bolthole). Still, we liked the gravity-fed beer pumps, with an upstairs cellar, and it's very unusual to find a building that's retained the same use over such a long period of time.

After a swift beer, we moved on to one of my favourite buildings - The Bluecoat - which is supposed to be the oldest building in central Liverpool (it was contsructed between 1717 and 1725, and later restored after extensive damage in World War II). Rather like Coram and the Foundling Hospital, The Blue Coat Charity School, as it was known, existed to 'teach poor children to read, write and cast accounts, and to instruct them in the principles and doctrines of the Established Church'. 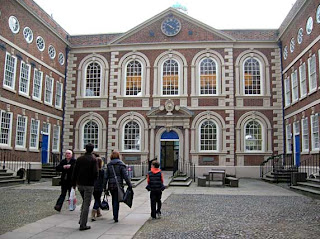 Dr William Moss gives us a realistic glimpse into the lives of the orphaned children:

...the boys are taught reading, writing and accounts; and those intended for the sea are instructed in navigation; the girls are taught reading, writing, spinning, sewing, knitting and housewifery: they are all at school one half of the day, and work the other half: many of the boys are employed in making pins; they are admitted at eight, and put out apprentices at fourteen years old.

It's not known who the architect of The Bluecoat was, but Thomas Ripley, architect of the Old Customs House, seems to be a good bet (see below for a view of it in 1831). After its post-war restoration it was reopened (and renamed Bluecoat Chambers) to coincide with the Festival of Britain in 1951 - it's now a centre for the arts. 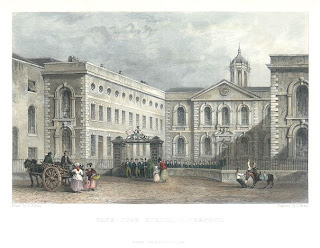 Above: Blue-Coat School, Liverpool, engraved by P.Heath after a picture by T.Allom, published in Lancashire Illustrated, 1831.
Source: Ancestry Images.

Coming next... Rodney Street and the strange case of Mackenzie's Tomb.

To brighten up your Monday, I bring you Georgian Lolcats. Enjoy! 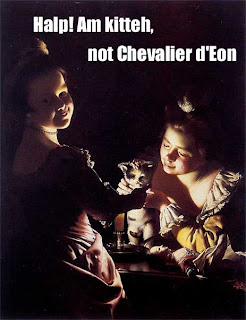 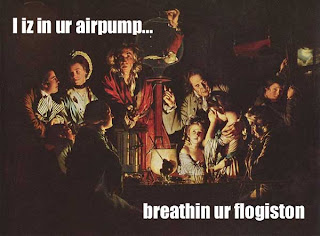 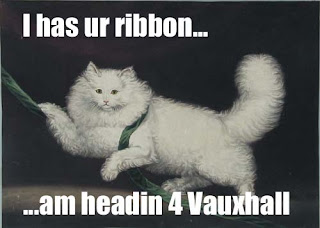