Things have been pretty busy lately but I'm glad to say I've been steered towards a couple of great blogs that have proved to be really pleasant diversions. I thought I'd share them with you here.

I think of myself very much as a nerdy history girl, so was delighted to find some like-minded individuals at the Two Nerdy History Girls blog. Written by bestselling authors Loretta Chase and Susan Holloway Scott, it's a cornucopia of quirky historical facts ranging from proper conduct between married persons of the 1830s to the miseries of Regency London. These ladies are experts at winkling out amusing and surprising facts, and the blog is great to dip into.

For those of you who share my twin enthusiasms for Georgian architecture and landscape, David Nice's blog, I'll Think of Something Later is a very engaging read, touching on subjects such as Georgian Dublin and Wotton House in Buckinghamshire. Nice's natural writing style and his lovely photographs make you feel as if you're strolling around some splendid grounds engaged in erudite conversation. Do have a look if you can. 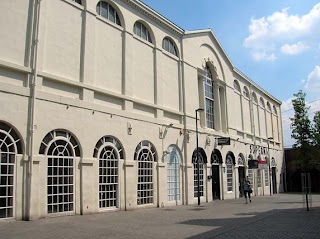 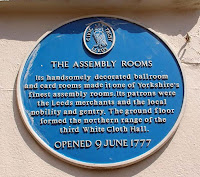 I can't help feeling sad for Leeds Assembly Rooms. In the late 18th century it was a glorious venue where balls and card parties were held for prosperous merchant families, now it's the site of restaurant chains and nightclubs and feels slightly down-at-heel. The railway - which was extended through the town in 1865 - really destroyed the original grandeur of the building, though attempts have been made to jazz up the area (known as the Exchange Quarter) as a destination for urban professionals.

The life of the "New" Assembly Rooms began in 1777, when Sir George Savile and Lady Effingham launched them above the third white cloth hall. Thanks to some sensitive restoration you can still see the front of this building (right, now occupied by Pizza Express). It was planned by wealthy Leeds merchants - spurred on by the opening of a rival cloth hall at Gomersal - and built on the Tenter Ground in the Calls. As the name suggests, the white cloth hall sold undyed cloth, whereas the mixed or coloured cloth-makers used the market in Briggate. It was constructed around a large central courtyard and it was two storeys high at the northern end (as mentioned, The Assembly Rooms were on the second floor). Big public events were sometimes staged in the courtyard, such as Mr Lunardi's balloon ascent in 1786. 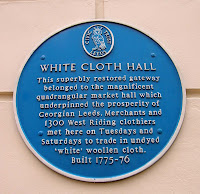 The cupola you can see in my photograph, above, actually came from the second white cloth hall, and was installed in 1786, when that building was demolished. The third white cloth hall was restored in 1991, and it was at this time that a small bell was put into the cupola (it's struck by an internal electric clock hammer, though rarely sounds now).

With the coming of the railway in 1865, they actually had to build a fourth white cloth hall (though the North Eastern Railway company did foot the bill for it). You can see in my photograph below how the North Eastern Viaduct literally sliced the New Assembly Rooms in half. Ironically this fourth hall was never fully used, and was demolished in 1895, though the building that now stands in its place (a hotel) also sports the original cupola, carefully preserved for posterity. 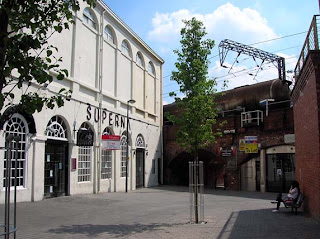 Georgian Homes Brought Back to Life

I noticed a stirring bit of news in an article in Saturday's Telegraph. Somersham Park House in the Cambridgeshire fens (left) and Eardisley Park in Herefordshire are just two lovingly-restored Georgian buildings which are now in the final of Country Life magazine's Restoration of the Century award. Somersham Park House, for example (which was built in 1802 on the site of the Bishops Palace of Ely) had virtually collapsed but in 2002 new owners began piecing it back together, even getting a local potter to reconstruct the four-foot-high chimney pots using remnants of the damaged originals. Check out Richard Johnson Restorations for some incredible before and after photographs.

Word of the Week: Kittle Pitchering

A jocular method of hobbling or bothering a troublesome teller of long stories: this is done by contradicting some very immaterial circumstance at the beginning of the narration, the objections to which being settled, others are immediately started to some new particular of like consequence, thus impeding, or rather not suffering him to enter into, the main story. Kittle pitchering is often practised in confederacy, one relieving the other, by which the design is rendered less obvious.

Subscribe now!
Posted by Mrs Woffington at 09:15 No comments: