Well, it's been some time since my Georgian Liverpool series and a trip, last weekend, to see Opera North in Leeds (left) proved to be the perfect opportunity to investigate another modern British city, looking for the traces of its 18th-century heritage.

Even though Leeds was a prosperous centre for woollen-cloth manufacture in the Georgian period, 18th-century traces were much harder to spot here than in Liverpool. Perhaps this is because we know Liverpool better, but also because Leeds - like Birmingham - is essentially a 19th-century city, packed with the grand buildings of Victorian commerce. Liverpool's Georgian glories are the genteel residents of the rising middle classes - the Regency terraces of Rodney Street and places like The Exchange where a tribute to that great Naval hero Lord Nelson can still be seen today.

In A Tour Through the Whole Island of Great Britain (1724), Daniel Defoe observed: 'Leeds is a large, wealthy and populous town, it stands on the north bank of the River Aire, or rather on both sides of the river, for there is a large suburb or part of the town on the south side of the river, and the whole is joined by a stately and prodigiously strong stone bridge, so large, and so wide, that formerly the cloth market was on the bridge itself. The increase in the manufacturers and of the trade, soon made the market too great to be confined to the bridge, and it is now kept in the high street [Briggate], beginning from the bridge, and running up north almost to the market house, where the ordinary market for provisions begin.

'The market is here twice a week. At seven the market bell rings (in the summer earlier, in the depth of winter a little later). It would surprise a stranger to see in how a few minutes, without hurry or noise, and not the least disorder, the whole market is filled; all the boards upon the tressels are covered with cloth, close to one another as the pieces can lie long ways by one another, and behind every piece of cloth, the clothier standing to sell it.

'Merchants in Leeds go all over England with droves of pack horses, and to all the fairs and market towns all over the whole island. Other buyers of cloth send it to London. They not only supply shopkeepers and wholesale men in London but for exportation to the English colonies in America and to merchants in Russia, Sweden, Holland and Germany.'

As I mentioned in my article on the Yorkshire coiners, it wasn't always plain sailing for 18th-century wool merchants in the north of England, but certainly the waterways (including the Leeds to Liverpool canal, built 1770-1816) were a major catalyst for the growth of Leeds as an industrial centre. As Defoe noted, it was the movement of the cloth market from the bridge into Briggate itself in 1684 that created the beginnings of the city of Leeds as we know it. Leeds soon became a prosperous centre, with the population (10,000 at the end of the 17th century) soaring to 30,000 by the end of the 18th. The Aire and the Calder rivers were made navigable, putting the Ouse, Humber and the sea in reach and propelling Leeds into the heart of the Industrial Revolution. 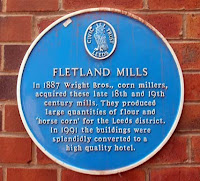 Walking beside the river, we found a couple of handy interpretive panels including the one above showing Samuel and Nathaniel Buck's South East Prospect of Leeds from 1745; the figures look out on fields full of tenter-frames on which the woollen cloth would have been dried and stretched. There was also a copy of the first map of Leeds by John Cossins in 1725 titled, A New and Exact Plan of the Town of Leedes. Perhaps the most interesting building in this area, though, is Fletland Mills: a collection of late 18th-and 19th-century mills that sprawl along the wharfside. Bought in 1887 by Wright Bros, the complex is now 42 The Calls (an upmarket hotel and restaurant). Just a glance at the back of the building (below) shows its antiquity. 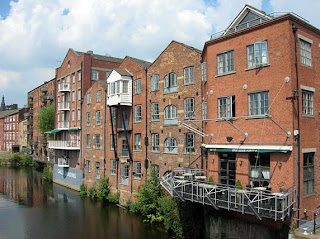 That's all for now but don't go away because next week I'll be looking at Leeds Assembly Rooms in Georgian Leeds: Part Two.

Subscribe now!
Posted by Mrs Woffington at 15:35 No comments: