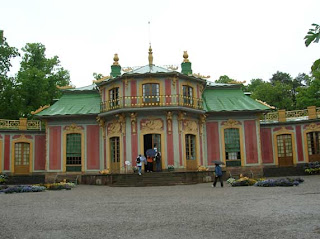 At last, a moment to upload a couple more photographs from our trip to Drottningholm in Sweden. Apologies for the slightly wonky photography here, but I was thoroughly soaked by driving rain and was snapping them with one hand while I held an umbrella with the other!

Anyhow, the Chinese Pavilion (Kina Slott, top) - like the Drottningholm Court Theatre - can be found in the grounds of the Palace and was built by King Adolf Fredrik as a present for Queen Lovisa Ulrika on her birthday in 1753. I wished I could have taken some photographs inside because it was stunning. All the rooms were different colours and gave a very intimate and playful picture of royal life (just to give you some idea, there's a picture here of The Green Drawing Room).

You can see from the buildings (below is The Billard Room, completed at the end of the 1760s) that it's very much an 18th-century notion of Chinese style, which looks slightly strange to us now. The Chinese did not use dragons as ornaments, and the bells hanging from the buildings were very much a feature of European chinoiserie. But I adored the lavish decoration in places such as The Mirrored Drawing Room, and also The Red Room, which looked like a lacquered Chinese box... Exquisite! 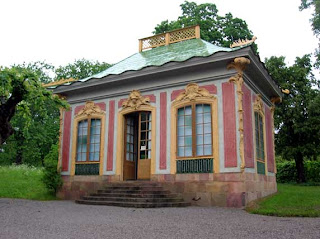 I am absolutely loving the work of Twitter’s own Dr Samuel Johnson, who brings an 18th-century flavour to current affairs. His latest tweets include:

I salute you, Sir.

Posted by Mrs Woffington at 12:58 No comments:

In Search of a Club

For reasons too tedious to go into here, I’ve decided not to renew my membership of The Johnson Society (Lichfield) next year; this year’s attendance at Johnson’s Birthday Celebrations – a special black-tie event this September, marking the Tercentenary – will be my goodbye to Johnsonian pleasures (though not a goodbye to Johnson, of course).

But this leaves me with a modest amount of cash to spend in support of another charitable Georgian organisation; I’m looking for something based in the UK that has a busy events schedule, and despite its distance from where I live, The Georgian Group, based in London, is coming up trumps at the moment – plenty of distinguished speakers, trips out, and use of the reference library and clubroom at 6 Fitzroy Square. Unfortunately I’m too old to join The Young Georgians (only by a few years mind!) but their spirited use of Facebook to keep abreast of forthcoming activities is a joy to behold.

If anyone knows of any worthwhile clubs, I’d be interested to hear about them.

Folks, I completeley forgot to mention that I am on Twitter. I don't post that often; less than Stephen Fry, more than Michael Fabricant, but it would be great to see some familiar faces from the Georgian blogosphere, should you be inclined to join.

Posted by Mrs Woffington at 16:57 No comments: