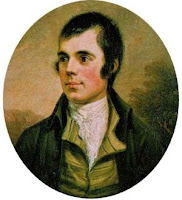 Don't forget it's Burns Night on Sunday; 2009 marks the 250th anniversary of the birth of Scotland's national poet, so a few wee drams are definitely in order. Check out the BBC's excellent 250 years of Robert Burns website for some traditional recipes and an audio archive of Burns' works. Here's the proper way to start addressing your haggis:

Fair fa' your honest, sonsie face,
Great chieftain o' the pudding-race!
Aboon them a' yet tak your place,
Painch, tripe, or thairm:
Weel are ye wordy o'a grace
As lang's my arm..

PS It's Saturday night and the haggis preparations are just beginning in our kitchen (see below). I'll be lining up a nip of whisky to chuck over the wee beastie later on. 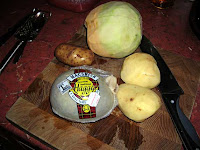 I've just come across this fascinating article by Alastair Macaulay in Tuesday's New York Times on the dancer, Hester Santlow, who managed to charm half of early Georgian London with her 'melting lascivious motions, airs and postures', but acted Shakespeare with equal confidence, having even played Ophelia on the night of her daughter’s wedding (not many could claim that!) Here's an excerpt; it's well worth a read, and it certainly puts Juliette Binoche's latest foray into dance into perspective.

One of her specialties, for more than 20 years, was a harlequin dance. (Her most famous portrait shows her in the dress from that work.) Jed Perl’s recent book "Antoine’s Alphabet" muses on Jean-Antoine Watteau’s fascination with harlequins; Santlow was Watteau’s contemporary, and her popularity was such that portraits of her in her harlequin costume sold widely on snuffboxes (according to a German writer in 1710). Another Santlow specialty was to loosen her hair as she danced - something that 250 years later became a device in several Balanchine ballets.

Posted by Mrs Woffington at 13:03 No comments:

The wonderful Out of Joint has just embarked on a UK tour of its 're-imagined' version of John Gay's The Beggar’s Opera: a co-production with Sydney Theatre Company. Called The Convict’s Opera, it keeps the 18th-century underworld setting, though moves it to a convict ship where inmates are ordered to stage a show. Georgian hits such as Over the Hills and Far Away are replaced with modern classics like Sailing and You’re So Vain. I saw Out of Joint's 2002 double-bill of She Stoops to Conquer and April De Angelis's A Laughing Matter, and if it's anywhere near as good as those, it should be a riot. The tour dates are here.

At this point in our Liverpool journey we deviated from Dr William Moss's guide book and walked over to Rodney Street: an area filled with fine Regency terraces. This and the surrounding streets can certainly compete with areas of Bath and Dublin for beauty and authenticity, and it's amazing that they aren't as well known. Here we took a short detour to see St Andrew's Presbyterian Church (below), built in 1823 and once described as 'an ornament to the town'. 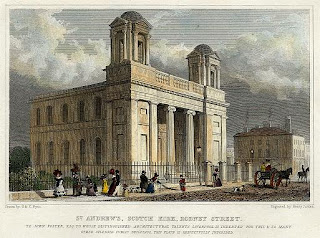 Henry Jorden shows it in its prime, but below is my picture of its current dilapidated state. Most of it has been shored up to avoid accidents (you can see the left tower has been removed entirely). At some point it was gutted by fire, and gives off a sad atmosphere. 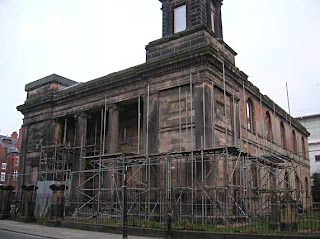 As we were peering through the fence at the graveyard, I spotted this strange pyramid tomb (below). 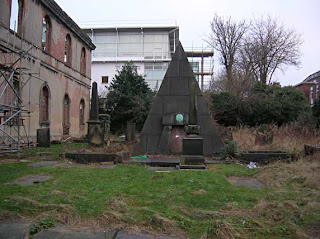 I did wonder if it was Masonic, but it was only later I discovered it's the tomb of William Mackenzie: a wealthy Victorian railway engineer and Liverpool's most notorious gambler. As the story goes, Mackenzie - hoping to win at poker - had promised his soul to the devil. He won the game, but falling ill shortly afterwards, began to fear that the devil would demand his part of the bargain. So with his winnings he constructed this tomb, leaving instructions that his card table and chair should be placed inside. He's supposed to be interred seated at the table holding the winning cards, thus cheating the devil out of his Faustian pact (presumably because his body was not in the ground). Mackenzie is said to haunt Rodney Street, so that explains the eerie, sad feel of the place!

Coming next... Liverpool's lost pleasure garden, and the end of our tour.

Queen of the Wits: A Life of Laetitia Pilkington by Norma Clarke (Faber & Faber).

Norma Clarke's scholarly biography takes a clear-eyed view of the life of Laetitia Pilkington: a Dublin poetess and wit whose sensational, ramshackle life would form the basis of her celebrated, three-volume Memoirs. Petted by Jonathan Swift and frequently competing for literary laurels with her curate-husband Matthew, Laetitia seemed destined for a respectable, literary life in 1730s Dublin.

That was until one fatal night in 1737 when Matthew burst into her bedchamber with a group of watchmen, discovering his wife alone in the arms of a dashing young surgeon. He cast her off, branding her an adultress and suing for divorce. Yet Laetitia's side of the story was somewhat different (not to mention a little glib): she was merely reading a book that belonged to the gentleman and he was waiting for her to finish it. She also claimed that this was one of many attempts by her husband to ruin her reputation so that he could run off with the wealthy Widow Warren.

One of the most interesting aspects of Clarke's book is the way in which she tries to upick the real Laetitia from her many different literary personas: 'poor Laetitia... the Foot-ball of Fortune' and 'genuine Successor of... immortal Swift', who enjoyed lampooning her male counterparts as the 'bastard Sons of Wit'. Clarke's descriptions of the young poetess, writing at the window of her London apartment, in full view of the wealthy patrons of White's club, are a joy. Her later years, marked by poverty and bitterness, find her working as a scandalous memoirist, struggling against a society of gender double-standards, where, as she put it, 'our seducers' are also 'our accusers'. Clarke's is a worthwhile and entertaining portrait of a true survivor. 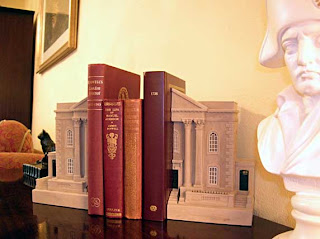 Thought I'd share with you these fantastic bookends that I got as a birthday present a few years ago. They are by Timothy Richards of Bath who makes architectural models of period buildings; mine is a split pair of bookends (as opposed to a single doorway) of Queen Anne House in Bath. Last I heard, the workshop was located 300 yards from Bath Spa station, but Richards also exports to the US (details on his website). I'm in good company because apparently Margaret Atwood has a pair of Richards' bookends incorporating plaster, brass and stained glass, which she was awarded at the 2005 Edinburgh International Book Festival. 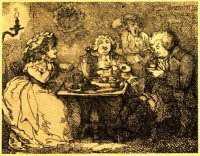 In honour of Sam Johnson's Tercentenary year, the annual Medieval market, held in the cathedral close during the Lichfield Festival in July, is going Georgian this year. More info on the website; we're told to expect wandering poets and musicians but what I want to know is: will the ferret roulette make a comeback?

Posted by Mrs Woffington at 17:51 No comments: