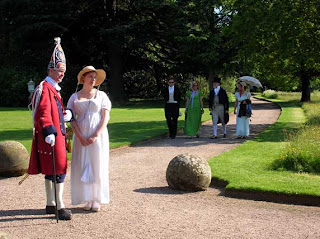 We had unfinished business at Shugborough Hall, so travelled up there again last weekend, and, because it was a bank holiday, found plenty of 'characters' in period costume wandering about (see above - I wasn't too sure about the Regency sunglasses!)

As the sign at the entrance (below) proclaimed, these people 'think they live in the 1800s... ask them about their lives but remember, they do not know anything about the 21st century, so please spare them any questions that assume such knowledge'. 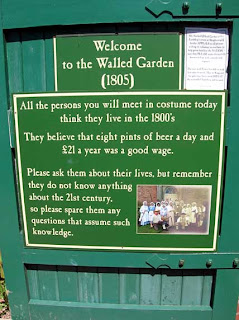 What fun! My boyfriend, who dreads the close proximity of people 'acting', was not so convinced, but we nevertheless had a good chat with the Miller who showed us the impressive working mill which grinds two types of flour: wholemeal for the workers and a fine version, sieved through silk, for the aristocracy. The ducks looked a bit worried as the level of the mill pond outside dipped, but he explained that the water pressure prevented him from draining it completely. I'll post something on Shugborough's Walled Garden shortly. 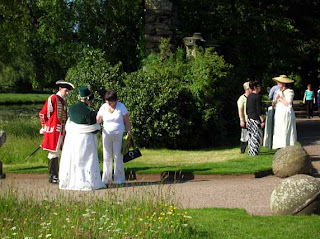 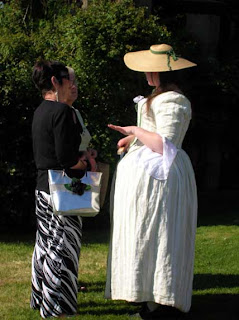 Very excited since we've made plans to visit Drottningholm - Sweden's magical 18th-century court theatre - for Handel's Ariodante. I've bought a CD of the opera (conducted by the wonderful Nicholas McGegan) because my Handel collection is in its infancy and we're going to need a libretto (no surtitles at Drottningholm!) Can't wait to see what a difference it makes, seeing a Handel opera fully staged; we recently attended the Academy of Ancient Music's concert performance of Arianna in Creta, and though it was wonderful musically, the lack of costumes and setting just killed the drama for me. I'll also be hot-footing it to the Drottningholm Theatre Museum if I get half a chance... At least this makes up for missing the Battle of Quiberon Bay!

Thought you might like to see my photos of the Lichfield Greenhill Bower yesterday; as mentioned in the previous post, it's an ancient tradition going back to the middle ages. The key moment in the parade is the crowning of the Bower Queen (Kate Chaplin, pictured below) by the Mayor.

To honour Dr Johnson in his Tercentenary year, the Bower Queen's float was impressively decked out with a replica of Johnson's birthplace, complete with a sign on it saying the residents were out 'taking young Sam to the Bower'. I loved the attention to detail - the Bower Queen's chair was a replica of the base of the Johnson statue in Lichfield's market square (there's a pic of the statue here).

Also below are pix of the morris men, the dignitaries outside the Guildhall, and a view of the crowds on Beacon Street. 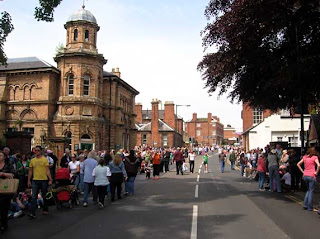 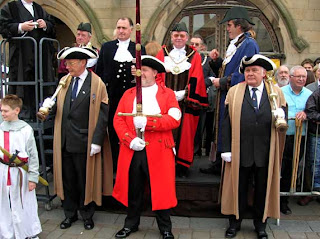 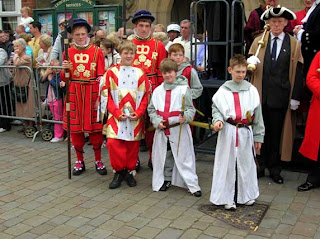 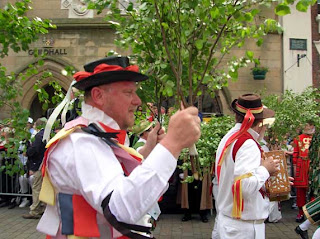 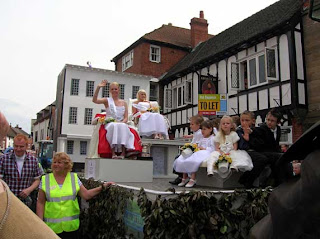 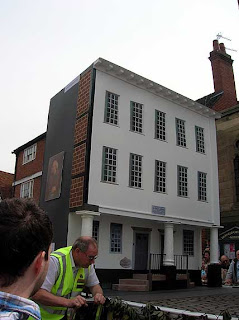 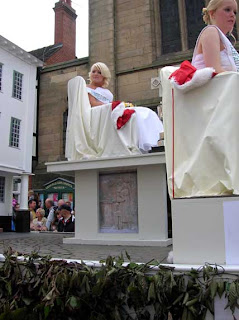 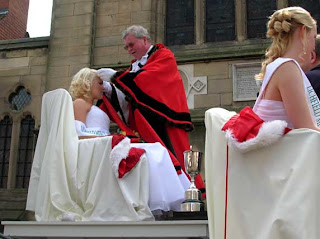 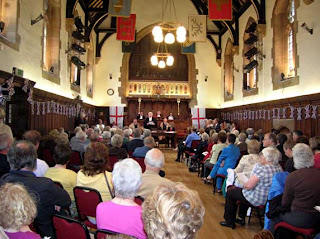 It's the Lichfield Greenhill Bower today, a street carnival that originates from the 12th century. Above is a shot I took this morning at the Court of Arraye at Lichfield's Guildhall - a kind of assembly of all men of arms which itself dates back to the early middle ages, and which involved a roll-call of able men and drill practice, followed by 'sport and pastime' (the latter being the origin of the Bower festivities).

Although the Acts requiring this assembly were abolished by James I, Lichfield kept the tradition going, though it changed from a serious assessment of military capability to a light-hearted affair that now involves speeches and jokes from local officials, presided over by the mayor. Needless to say, this morning there were a lot of jokes about MP's expenses! More on the Bower, and the Samuel Johnson Tercentenary float, shortly.