The Grammar of Antiquity 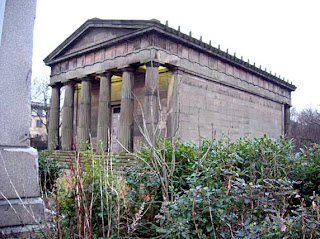 The other day, I was wondering aloud if a building were Greek Revival or not, and no sooner had this come out of my mouth, than my boyfriend was recommending this book (below, which, thanks to our chronic Amazon habit, we ordered pretty much immediately). It was written by John Summerson (who was the curator at the Sir John Soane's Museum until 1984), and is based on six talks he did for the BBC in 1963.

I can see why it's a classic; Summerson has a knack for talking about architecture in an accessible way, and the book covers everything from Palladian architecture to triumphal arches and Roman baths. It's well illustrated and I like the way he uncovers the playful wit behind what look like highly rational buildings (see his discussion of Michaelangelo's vestibule to the Laurentian Library in Florence, which - with its blind windows and retreating columns - is an elaborate architectural joke). There's also a fascinating final chapter where Summerson looks at modernism's classical roots, with reference to such buildings as the Philharmonic Hall in New York's Lincoln Center.

Here he is on the Greek Revival style:

Till the middle of the 18th century Greek architecture was something of a mystery [in England]. Everybody knew that the Romans had got their architecture from the Greeks... But nobody ever went to Greece. It was a long way off; it was part of the Ottoman Empire and neither an easy nor safe place for the Western traveller... The first Greek Doric buildings built in England were built more or less as curiosities, exotic souvenirs, in the form of temples and porches on gentlemen's estates. But about the turn of the century the conviction that the Greek Doric - and Greek Ionic and Greek Corinthian - were in all ways purer and better than their Roman couterparts had won the day, and the Greek Revival proper had started.


Above: The Oratory, Liverpool, built in 1827 by John Foster in the Greek Revival style. Photograph © Memoirs of the Celebrated Mrs Woffington.

Word of the Week: Barber-monger

A word of reproach in Shakespeare, which seems to signify a fop; a man decked out by his barber.

Draw, you rogue; for though it be night, the moon shines; I'll make a sop of the moon-shine of you; you whoreson, cullionly, barber-monger, draw.
- Shakespeare's King Lear.

From: Samuel Johnson's Dictionary of the English Language: An Anthology 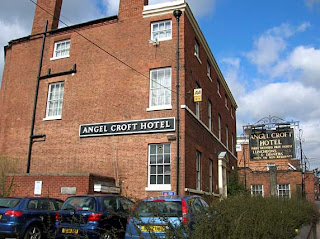 This is Lichfield's Angel Croft Hotel, at one time, the city's very own Fawlty Towers if the reviews are anything to go by, though it's now closed. In the late 18th century, George Addams, a wine merchant, had a house built at 3 Beacon Street - it was turned into the Angel Croft Hotel around 1930.

Last we heard, it had been bought by the Best Western chain, which owns Lichfield's George Hotel, an historic coaching inn where the playwright George Farquhar was supposed to have stayed. The Angel Croft is listed, and the front railings and gates (circa. 1750, see below) are regarded as 'at risk' by English Heritage. A schedule of works has been agreed, but so far, nothing has been done to repair them. Take a good look because, unless the current owner pays them some attention soon, these elegant gates won't be here for very much longer! 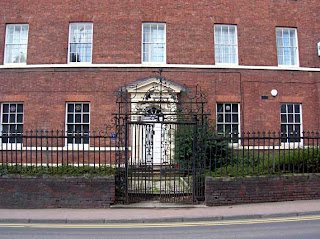 A Woman of Considerable Renown 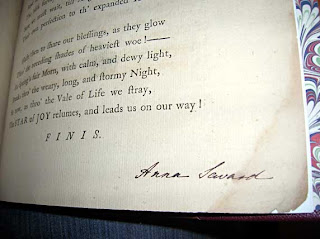 I attended Marion Roberts' talk last night in the Erasmus Darwin House, which was a fascinating insight into Anna Seward and her literary importance in 18th-century Lichfield and beyond. Roberts has been studying Seward (which, she was keen to point out, should be pronounced See-ward) for 20 years, and certainly knows her stuff! See below for some pictures of the exhibition on Seward's life (apologies for the blurring, but only non-flash photography was allowed). 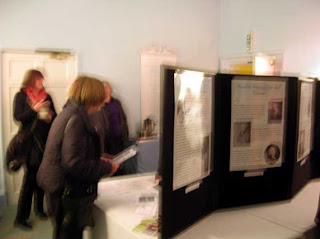 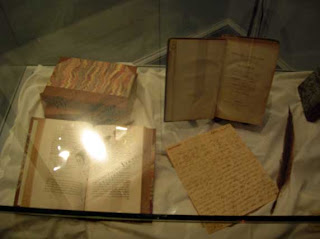 I loved this letter (above right) in which Seward outlined Erasmus Darwin's advice about preventing the total destruction of her teeth. (It made me smile because it confirmed what Professor Peter Martin told us in passing a few weeks ago about Seward's bad teeth). This was displayed alongside copies of her Memoirs of the Life of Dr. Darwin (the open books above left and right).

But perhaps most exciting was this case (below) containing a first edition of Seward's verse novel Louisa alongside a signed letter by the author. You remember I was recently given a first-edition copy of Louisa, which I thought might contain the author's signature (see top)? Well, I was able to take it out and compare it to the letter, and found the signatures to be the same. Marion Roberts also had a look and confirmed it was Seward's handwriting. She also showed me some photographs of an amazing mourning ring that she owns containing a minute lock of Seward's hair, about the size of a fingernail! 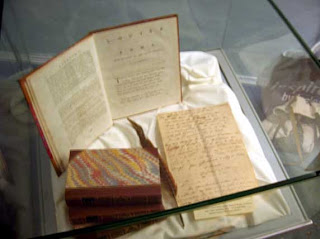 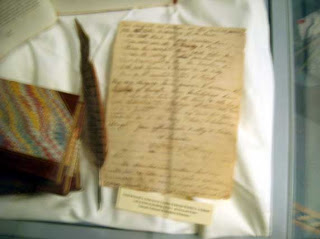 I must say I'm enjoying Anna Seward and Classic Lichfield by Stapleton Martin, despite the scary portrait on the cover (see left).

It was written in 1909 both to commemorate her centenary and to try to raise her profile; as the preface says: 'Literature and music and science have been found this year amazingly prolific in centenary commemorations of their great exemplars... yet the death in 1809 of Anna Seward, who "for many years held a high rank in the annals of British literature," to quote the words of Sir Walter Scott, has generally passed unnoticed.'

The book has been reprinted by Dodo Press this year to mark the 200th anniversary of her death (which is tomorrow), and though the writing style is pretty florid, I've learnt some curious things from it.

Martin doesn't pull his punches; on the subject of Seward's Memoirs Of The Life Of Dr. Darwin he says: '[Her] Memoir she called, "The woman's might in biography". This book... is, nowadays, considered but a poor piece of writing.' Yet many thought her a fine poet; let's not forget that Erasmus Darwin actually nicked her work and passed it off as his own in his poem, the Botanic Garden, an act that Stapleton describes as 'ungallant, to say the least'.

Curiously, Anna's family had several pet names for her, including Nancy and Julia (she was baptised Anne but preferred Anna). Sadly, all of Seward's siblings died in infancy, except one beloved sister, Sarah, who died aged 19, almost on the eve of her marriage to Dr Johnson's son-in-law. There's a monument (pictured here) in Lichfield Cathedral which commemorates Seward, her parents and Sarah. It depicts the poetess mourning her relations while her harp hangs, neglected, on a tree.

The epitaph is by Sir Walter Scott:

Amid these Aisles, where once his precepts showed,
The heavenward pathway which in life he trode,
This simple tablet marks a Father’s bier;
And those he loved in life, in death are near.
For him, for them, a daughter bade it rise,
Memorial of domestic charities.
Still would you know why o’er the marble spread,
In female grace the willow droops her head;
Why on her branches, silent and unstrung,
The minstrel harp, is emblematic hung;
What Poet’s voice is smother’d here in dust,
Till waked to join the chorus of the just;
Lo! one brief line an answer sad supplies—
Honour’d, belov’d, and mourn’d, here Seward lies:
Her worth, her warmth of heart, our sorrows say:
Go seek her genius in her living lay.