Word of the Week: Galley Foist

A city barge, used formerly on the lord mayor's day, when he was sworn in at Westminster. 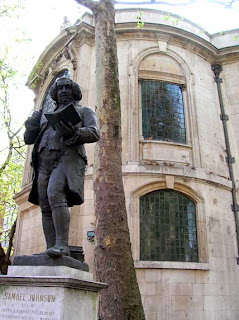 A quick look at the Samuel Johnson Project website confirms the exciting news that Tesco has stumped up over £50,000 to fund a public art project in Lichfield addressing the works of Johnson, Darwin and Anna Seward.

Part of the grand plan is the creation of three sculptures, developed around Johnson’s life and work, placed around the city (one will be at the Samuel Johnson Hospital, with the other sites to be confirmed). Limited space is being created on the bases of the sculptures to have supporters’ names cast in bronze; apparently immortality can be yours for a minimum donation of £27.50.

From April 8th Ikon Gallery is staging a show of vignettes by Thomas Bewick (1753-1828). He was a favourite artist of Anna Seward and of Charlotte Brönte. A vignette (pictured) from Bewick's A History of British Birds is mentioned in Jane Eyre (‘The fiend pinning down the thief's pack behind him, I passed over quickly: it was an object of terror’). 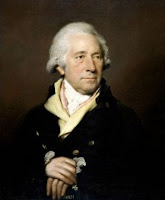 I saw the excellent CBSO Baroque Ensemble play an Erasmus Darwin-themed concert in Lichfield Cathedral some years ago, and loved the way in which they combined intimate chamber pieces with well-chosen readings from and about Darwin. So it’s great to see them back on Sunday – this time at the CBSO Centre in Birmingham - presenting a Pepys Portrait. This comprises music by Purcell, Locke, Mattheis and Gottfried Finger, with excerpts from the great 17th-century diarist's work, plus some authentic small cakes, served to the audience on a first come, first served basis (see the CBSO's blog for further info).

But that’s not all. This year is Matthew Boulton’s Bicentenary and the man (pictured above) – often referred to as the ‘Father of Birmingham’ – has inspired another outing from the CBSO Baroque Ensemble: Hark! I hear Musick!, performed at Birmingham Cathedral on July 4th. Billed as ‘a light-hearted evening of music that Boulton is known to have enjoyed… interspersed with readings from some of Boulton’s letters’, it's the perfect opportunity to salute the great Brummie industrialist. 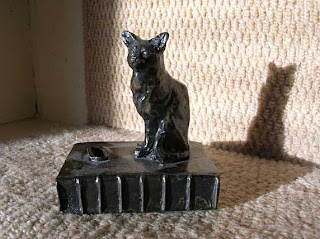 During a browse in a local bookshop this weekend we found a pamphlet of the following poem by Percival Stockdale, which I snapped up for the bargain price of 50p. It adds nicely to my recent post about Hodge, although the title is misleading - we know from Boswell's Life that Johnson 'had cats that he liked better' than Hodge (there was Lily, for a start, a 'white kitling' who was 'very well behaved').

Percival Stockdale published the Elegy in 1778, and then again in his collected poetical works in 1810, when he gave it the date 1764, though there has been some dispute over this because Hodge doesn't seems to have died until later (Mrs Thrale seems to have known the cat, though she didn't meet Johnson until 1765). We know from Stockdale's poem that Hodge was black, however, because he speaks of the cat's 'sable fur'.

My copy of the poem is a commemorative reprint for the unveiling of the statue of Hodge in Gough Square, London, on September 24th 1997.

Let not the honest muse disdain
For Hodge to wake the plaintive strain.
Shall poets prostitute their lays
In offering venal Statesmen praise;
By them shall flowers Parnassian bloom
Around the tyrant's gaudy tomb;
And shall not Hodge's memory claim
Of innocence the candid fame;
Shall not his worth a poem fill,
Who never thought, nor uttered ill;
Who by his manner when caressed
Warmly his gratitude expressed;
And never failed his thanks to purr
Whene'er he stroaked his sable furr?
The general conduct if we trace
Of our articulating race,
Hodge's, example we shall find
A keen reproof of human kind.
He lived in town, yet ne'er got drunk,
Nor spent one farthing on a punk;
He never filched a single groat,
Nor bilked a taylor of a coat;
His garb when first he drew his breath
His dress through life, his shroud in death.
Of human speech to have the power,
To move on two legs, not on four;
To view with unobstructed eye
The verdant field, the azure sky
Favoured by luxury to wear
The velvet gown, the golden glare -
--If honour from these gifts we claim,
Chartres had too severe a fame.
But wouldst though, son of Adam, learn
Praise from thy noblest powers to earn;
Dost thou, with generous pride aspire
Thy nature's glory to acquire?
Then in thy life exert the man,
With moral deed adorn the span;
Let virtue in they bosom lodge;
Or wish thou hadst been born a Hodge. 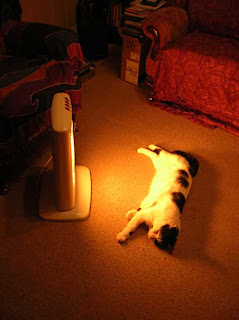 Top: My maquette of Hodge's statue; the original was made by Jon and Lynn Bickley at their studio in Norfolk.

Above: Boris during the recent energy crisis.

I've been tipped off this morning by weakspeaker about Mark Lawson's interview with Johnson biographer Peter Martin on Monday's Front Row, which is available for seven days thanks to the magic of listen again. Twitter fans can also track the walkers here - surely this is proof that social networking doesn't damage the brain?

Posted by Mrs Woffington at 13:10 No comments: 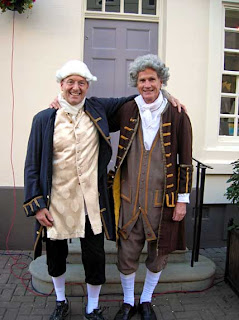 Yesterday morning we diverged from our usual route to work in order to catch Dr Nicholas Cambridge (as Garrick, above left) and Professor Peter Martin (as Johnson, right) setting off for London, an event that marked the official opening of Johnson's 300th birthday celebrations. They posed for me outside the newly-painted grey door of the Birthplace while waiting for the BBC, who had somehow got lost en route from Birmingham.

We really wished we could have stayed longer; we saw the Mayor and his macebearers, all decked out in their civic regalia. We chatted to one of the macebearers who was carrying the gilt mace (see below). Thrillingly, he let me put on his white glove and hold it, with the weight supported on my shoulder. He told us it dated from the reign of William & Mary (1689-1694) - I was actually holding an object that Johnson and Garrick probably saw on civic occasions in Lichfield in the 18th century! 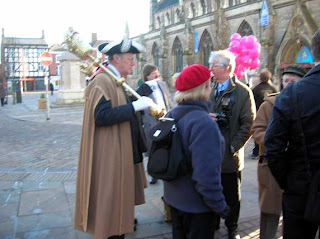 We had a fantastic time at Intimate Theatre's The Golden Moment: A Family Farewell to Johnson, which was staged at the Samuel Johnson Birthplace Museum in Lichfield yesterday. Below are some photos of the pre-preformance reception - you can see what a squeeze it was, getting everybody into the bookshop and small reception room. I had to get up onto the staircase to take the first picture (below), and you can see how low the beam is. 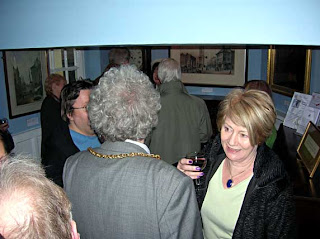 It was a great opportunity to spot some distinguished Johnsonians. I think I saw the Mayor of Lichfield (that looks like a Mayoral chain of office, above) and Richard Harris, the former Bishop of Oxford, who had come from preaching on Charles Darwin at Lichfield Cathedral. While I'm shamelessly name-dropping, I might as well mention that we also saw John Sergeant on the way - flush from his sell-out Johnson-themed show at the Lichfield Garrick the night before. (He recently enriched the public stock of harmless pleasure on Strictly Come Dancing).

Happily, we were sitting behind Dr Nicholas Cambridge and Professor Peter Martin, so were able to wish them luck on their historic walk, celebrating Johnson's Tercentenary and raising money for the National Literacy Trust. 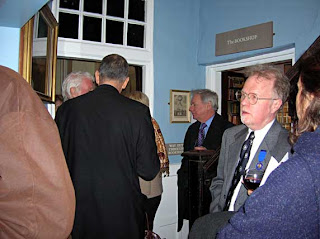 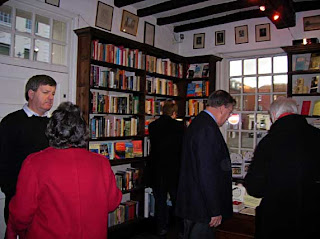 The play, which was written and directed by David Titley, centred on the general strife in Johnson's household on the morning of his departure for London. I snapped some scenes (below), which took place in the Birth Room; there's a great portrait of Johnson's friend and mentor, Gilbert Walmsley, on the wall in the second picture. 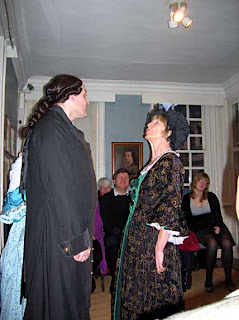 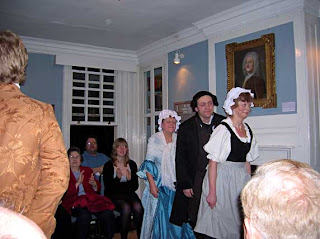 Stuart Goodwin, as Sam Johnson (below) kindly posed for me in the Market Square afterwards; shame the Johnson statue behind him didn't come out on the photograph! 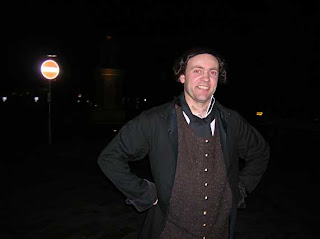