The Cathedral had a wonderful rosy glow on it just now; I couldn't resist nipping into the Memorial Garden to take these pictures. 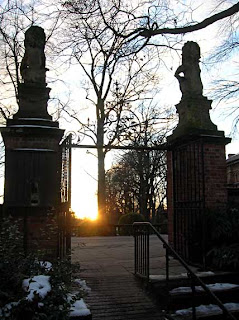 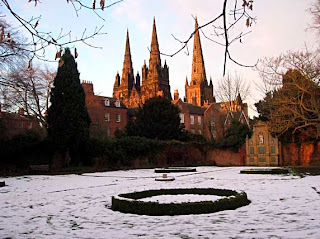 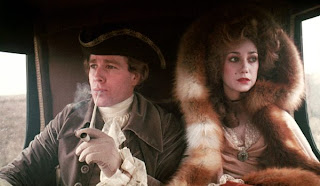 One thing we didn't manage to catch on our visit to the capital was a screening of Barry Lyndon, currently showing at the BFI as part of a Stanley Kubrick season. His 1975 version of Thackeray's novel is considered to have been one of his finest achievements (he insisted on shooting it using authentic period lighting), and came after an abortive attempt to film a life of Napoleon. The good news is that it's available on DVD (I feel a purchase coming on...) The Guardian's review is here.

Word of the Week: Lunch, Luncheon

As much food as one's hand can hold.

When hungry thou stood'st staring, like an oaf
I slic'd the luncheon from the barley loaf;
With crumbled bread I thicken'd well the mess.
- Gay.

We had some tickets for the British premiere of Korngold's Die Tote Stadt at the Royal Opera House this weekend, which was hugely exciting, but while we were in London we also had time to take in a couple of 18th-century museums: The Foundling Museum and Benjamin Franklin's House. They were totally different from one another; I'll post on Franklin shortly, but first, let me show you some snaps of The Foundling Museum in Bloomsbury. 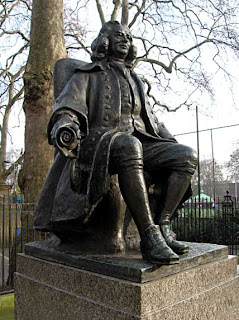 Above is a statue of founder Captain Thomas Coram (you might recognise it from the Hogarth painting) and below is the exterior, with a bust of Coram over the door. Coram was a philanthropic sea captain who campaigned to create a 'hospital for the maintenance and education of exposed and deserted young children'. Hogarth was an early governor (he designed the uniforms for the children and the charity's coat of arms) and later, Handel gave the proceeds of a performance of Messiah to the foundation, as well as leaving a fair copy of the score to the hospital in his will. 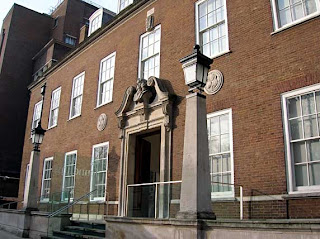 I'm not sure why the original building was demolished in 1926, but today's museum (above, which stands adjacent to the original site of the Hospital) has some really impressive artefacts. On the ground floor we saw a fantastic exhibition on the Hospital's history, including some of the little tokens that were pinned to the children's clothing by parents for identification purposes, and original petitions from the mothers, some of which were very moving (a typical one states: 'I am sorry to be thus unfortunate an particular as it is intirely out of my power to suport [the child] as the father is absent. To had to my misfortune I have been deprived of parents ever since I have been five years old and have not a friend to apply to and no not in wat manner to support the enfant an I have thus been so unfortunate an only been a servent sence I was fourteen'). 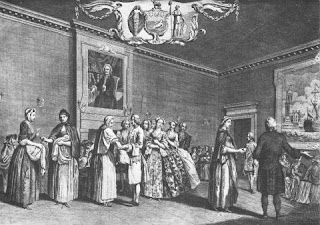 One thing I didn't know about the Hospital was that, because of the huge demand for charity, if a petitioner were successful she had to return with her child the following Saturday and take part in a ballot (pictured above), whereby she was given a bag and drew either a white ball (success) or a black ball (rejection). Incredibly, this took place in the Hospital chapel, with spectators positioned in the gallery above - it's difficult to imagine how distressing this must have been! 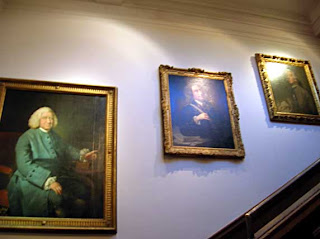 Coram, despite his ordinary background, managed to elicit an extraordinary amount of support for The Foundling Hospital, and it became to all intents and purposes, Britain’s first public exhibition space. Unfortunately I couldn't photograph them, but the museum includes several galleries, painstakingly reconstructed from the originals, and studded with works by Hogarth, Reynolds, Gainsborough, Wilson, Hayman, Highmore, Roubiliac and Rysbrack. The picture above is of the staircase, but even here we have a famous painting of Handel's librettist, the outspoken Charles Jennens (far left). 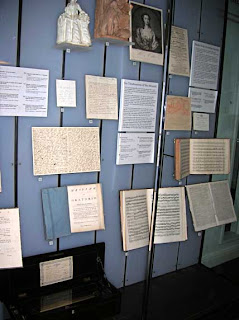 We found a temporary exhibition called Handel the Philanthropist on the top floor, stuffed full of gems from the Museum's own Gerald Coke Handel Collection. In the glass case above was a portrait of Susannah Cibber, a china figure of Kitty Clive and various Handel scores, though perhaps one of the most fascinating exhibits was Handel's last will and testament on a special stand alongside; you could see evidence of the deterioration in his eyesight as he amended his will over a period of years, and his signature became shakier.

This is a must-see for anyone interested in the 18th century - the shop alone has enough to occupy Handel fans for quite some (not least a copy of Christopher Hogwood's 2007 Handel biography). As you can see from the picture below, we did buy the tea towel :) 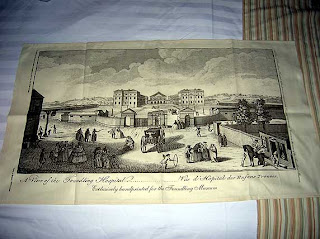 To Winter by William Blake 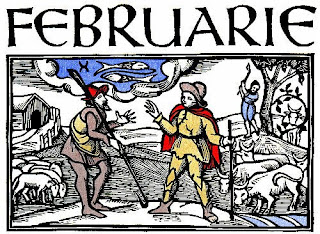 O Winter! bar thine adamantine doors:
The north is thine; there hast thou built thy dark
Deep-founded habitation. Shake not thy roofs,
Nor bend thy pillars with thine iron car.

He hears me not, but o'er the yawning deep
Rides heavy; his storms are unchain'd, sheathèd
In ribbèd steel; I dare not lift mine eyes,
For he hath rear'd his sceptre o'er the world.

Lo! now the direful monster, whose skin clings
To his strong bones, strides o'er the groaning rocks:
He withers all in silence, and in his hand
Unclothes the earth, and freezes up frail life.

He takes his seat upon the cliffs,--the mariner
Cries in vain. Poor little wretch, that deal'st
With storms!--till heaven smiles, and the monster
Is driv'n yelling to his caves beneath mount Hecla.
Illustration: From Old Books