Word of the Week: Redshank

This seems to be a contemptuous appellation for some of the people of Scotland.


From: Samuel Johnson's Dictionary of the English Language: An Anthology 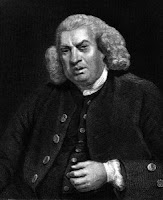 'He was a friend of Bosworth,’ drivels the website, ‘and also a frequent visitor to The Green Man in Ashbourne’. The reference is, I think, to the Grammar School he co-founded in Market Bosworth (unless they’re confusing it with Boswell), and as for The Green Man (which he referred to as ‘a very good inn at Ashbourne’), he apparently drank there so often that you can witness the great man’s chair if you visit the pub. Having been to Ye Olde Cheshire Cheese, just around the corner from Gough Square, which also claims to display Johnson’s chair - and Johnson’s bench too - you do begin to wonder if these breweries have got some sort of a deal going.

Posted by Mrs Woffington at 14:19 No comments: