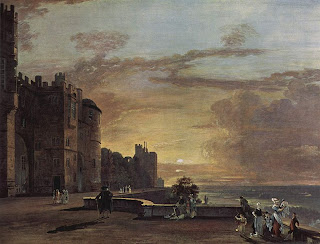 Windsor Castle by Paul Sandby, source: Wikimedia Commons
Before it closes on October 18th, I hope to catch the Picturing Britain exhibition at Nottingham Castle which gathers together the work of an extraordinary - and largely forgotten - 18th-century topographical artist called Paul Sandby. Marking Sandby's bicentenary year, the show encompasses the Nottingham-born artist's accomplished landscape painting (he was known as a staunch defender of English landscape) and, perhaps most interestingly, his satirical works.

Sandby was a critic of Hogarth, who became the target of a series of savage prints in the 1750s and early 1760s. These find Sandby ripping into The Analysis of Beauty, casting Britain's most popular artist as an inane fool in a harlequinade and a fitting subject for A New Dunciad. It's jaw-dropping stuff, even by today's standards. 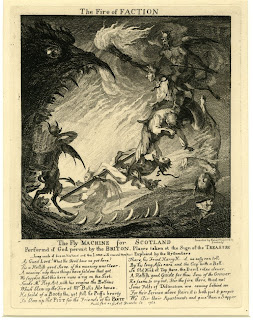 Paul Sandby, Satire on Hogarth, shown as a devil fanning the fire at the mouth of hell.
Source: Monster Brains

Word of the week: Pattering

The maundering or pert replies of servants; also talk or palaver in order to amuse one intended to be cheated. Pattering of prayers; the confused sound of a number of persons praying together.