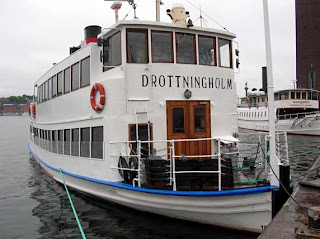 Well, as promised, some photos from our trip to Drottningholm and some impressions of the Handel opera that we saw there, Ariodante.

Firstly, one of the things that delighted us about Sweden was the extraordinary care taken to preserve ordinary things, such as the turn-of-the-century steamer, s/s Drottningholm (above), which we used to access Drottningholm Palace (below). On our way to the Vasa Museum we also used the old tram system, that was also wonderfully cared for, though that's not to say Stockholm is an old-fashioned city - quite the opposite. It's just that the Swedes appreciate beautiful design, and it was great to see so much that was charming, well cared for, and above all, still in good working order. 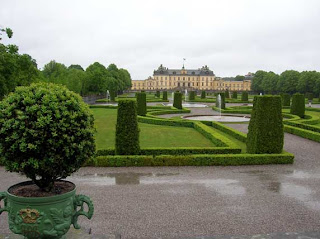 Our tour of the Drottningholm Court Theatre was extrordinary, and an example of the Swedish knack for preservation. As we crowded into the tiny entrance hall, it dawned on us that, though the place had been carefully conserved, it was not actually restored - the walls and floors were battered and creaking, and the paint was flaking off, but we were - thrillingly - standing in a building which had been pretty much untouched since the 1760s. 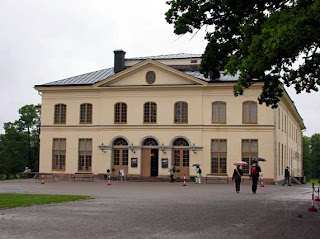 Tourism itself has actually contributed quite a bit of damage to this fragile building (south facade, above). In 1980 about 43,000 tourists tramped through the building, and 18,000 saw performances there - so now bags have to be locked away and the guides are pretty careful to prevent people from leaning on or touching anything. When you see the fragile wall-coverings, you understand why, but who ever thought that 18th-century wallpaper was sewn together and nailed up in sheets? But that's what's marvellous about this place: noticing that the reality of a historical period is subtly different from what you imagined. 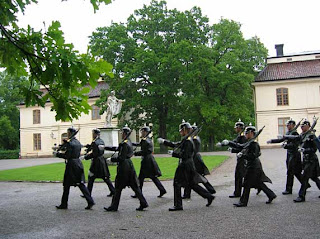 It was an exciting moment when, after the changing of the guard (above), we got to take our seats inside the auditorium, which is surprisingly intimate. There are some marvellous example of trompe-l'œil paintings of curtains on the boxes (done by the carpenter, Nils Ulfitz; you can just about see them in the picture below, to the left and the right) and also some curious boxes fronted by grills, presumably for secret assignations!

The theatre now seats double the amount of people it did in the 18th century; our seats were behind a kind of proscenium arch at the back which, appropriately, was where the poor people used to sit (a curtain would be dropped, screening them from the King, until the performance began). One of the curious and really effective modern interventions are the Drottningholm lights - electric candlebulbs that shimmer in their sockets like actual wax candles. 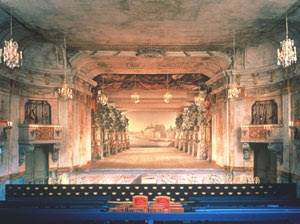 We never got to see the wooden stage machinery back-stage (although there's a video about it on the website). Pictures of ropes and driving mechanisms make it look like a ship, and indeed, sailors were traditionally employed as stage-hands. Nevertheless, Ariodante did call for a brief burst from the thunder machine, and the movement of the wooden waves at the back, and we of course witnessed the side flats sliding into place with a big clunk.

I think this produdction of Ariodante, coupled with the DVD we watched of Giulio Cesare, really helped us to get a better understanding of Handel's music (I was wrong about the surtitles by the way - Drottningholm has them in Swedish). Although Ariodante was broadly in 18th-century dress, I wasn't too keen on the fantastical touches of tartan, to suggest the Edinburgh setting, but then, I'm a bit of a purist. There was some lively singing and playing from the period-instrument orchestra, and in spite of the endurance test presented by sitting on wooden benches, we were utterly transported into another age. 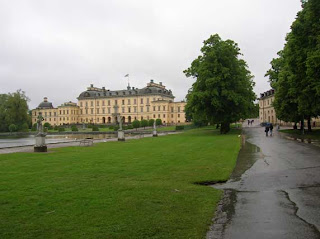 The author Sarah Jane Downing kindly gave me an interview recently on her new book about Georgian Pleasure Gardens. If you're in London you can catch her giving a lecture in November to The Georgian Group - details below and on The Georgian Group website.

The English Pleasure Gardens were the public galleries of their time - an embodiment of the romanticism of the Grand Tour. The Temple of Comus at Vauxhall was a Rococo marvel and the Rotunda at Ranelagh was a triumph based on the Pantheon in Rome. They inspired the finest artists, musicians and writers: Hogarth, Canaletto, Handel, Mozart, Walpole, Smollett, Burney and Austen all wrote about, painted or are otherwise associated with the gardens, many of which disappeared almost without trace during the nineteenth century. Sarah-Jane Downing brings back to life a forgotten art-form that was quintessentially English, of real social and artistic importance in its time.

Posted by Mrs Woffington at 13:49 No comments: 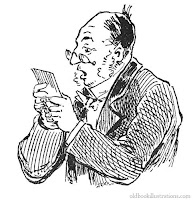 In the news today: The British Library has digitised two million pages from 19th-century newspapers and made them available online. You can buy a 24-hour or seven-day pass to read reports on such things as The Battle of Trafalgar or the 1878 banking collapse. More details here and on The British Library site.

Posted by Mrs Woffington at 10:55 No comments: 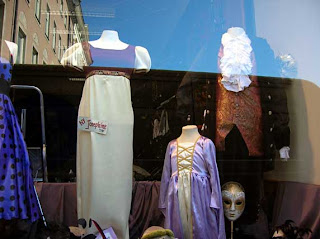 Ah, Stockholm. I'm back home now and can't quite believe that I was in Sweden's capital just this morning. What a great city; I took the above picture of a shop called Scaramouche in the Old Town around 10.30am, which I assume is a costume hire shop, though there can't be many cities where it's this easy to pop out for an Empire line dress or a mid-18th-century suit! I have lots I want to post up, particularly about Drottningholm Court Theatre, and the Chinese Pavilion (as recommended by Tutta Rolf) but for now I've got to turn my mind to work. All good things must come to an end, I suppose...

Posted by Mrs Woffington at 22:02 No comments: 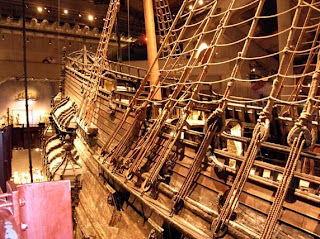 Another great day in Stockholm, though not quite so 18th-century in flavour. We saw the astounding sight of the 17th-century warship, the Vasa (above and below), which capsized in 1628 - truly as much a work of art than a fighting machine. Eighteenth-century ships were nowhere near as elaborately carved, but it was a exciting experience standing at ground-level, beneath what would have been the water line, and looking up at the flank of this enormous vessel... 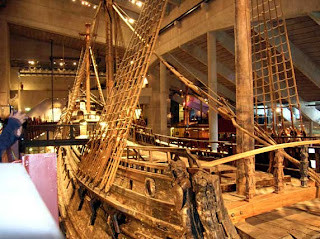 Posted by Mrs Woffington at 17:52 No comments:

No images with this post I'm afraid because I'm blogging in a bizarre fashion from the television screen in my Stockholm hotel. I'm going to be posting up my pictures of today's trip to Drottningholm soon - we were extremely impressed with the palace and the beautiful 18th-century theatre, though the weather, it has to be said, has been dreadful. Still, not even wet shoes and socks could dampen my enthusiasm for the theatre; it's so rare to get the chance to see something original from the period (it hasn't been restored, but is pretty much as it was in 1766). Seeing a Handel opera there was an unforgettable experience; when I came out I was mildly surprised to see modern buildings, I'd been transported so thoroughly into the past. Well, more on this when I have access to my photos and a screen that isn't making me cross-eyed... We've loved Stockholm so far; the people have been friendly and the architecture and food are stunning. Visited the opera's tiny Backfickan bar yesterday for meatballs and some knockout rye bread; off to the Vasa Museum tomorrow to see the mighty warship that foundered in 1628. Let's hope it stops raining.