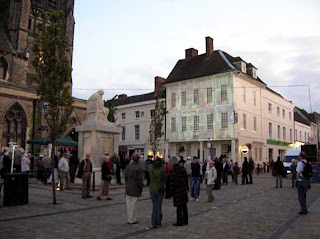 Well, today marks Dr Johnson's 300th birthday and to kick off a weekend of celebrations, tonight Lichfield was treated to a son et lumière by artists David Harper, Andy Mckeown and Peter Walker, projected onto the sides of Johnson's house.

We went down to the markeplace for about 7.15pm to find the projection underway (above) and the bell ringers of St Mary's in full swing. But then it was a quick walk over to Minster Pool to catch the official launch: a lantern parade by local children (below). 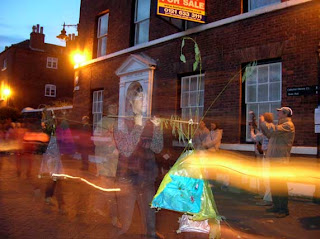 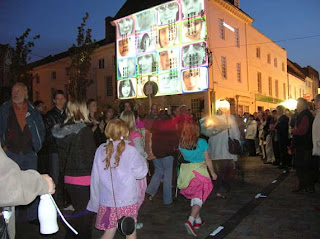 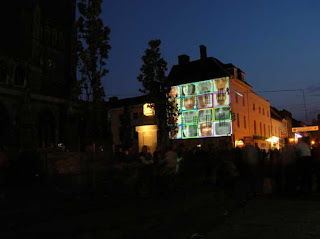 You can see the first part of the artwork above, which was a projection of Lichfield people talking about their favourite words from the dictionary; this then changed into an A to Z of Johnson's life (below), narrated by local actors and interspersed with dictionary definitions. It also included music from the Lichfield Cathedral Chamber Choir including the Hallelujah Chorus from Handel's Messiah. We talked to Johnsonians from America, Sweden, Norway, Australia and Bulgaria, all milling about in the crowd. 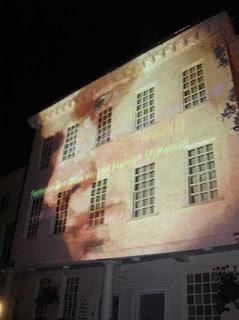 The Market Street side of the Johnson Birthplace Museum also came to life as Lichfield's own Dictionary of the English Language - you could go along to the tent opposite the front door and type your name and favourite word into the computer for it to be added to a live scrolling projection of words (needless to say, this quickly degenerated into 'add me as a friend on Facebook', but it was still fun to watch).

At 10pm there were fireworks over the Market Square and we joined some other members of the Johnson Society at the King's Head for some birthday cake, which was cut by Dr Nicholas Cambridge. Tomorrow, the Tercentenary supper... 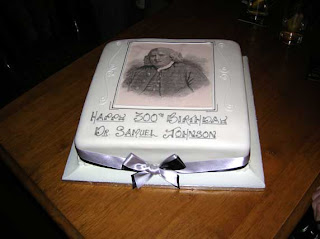 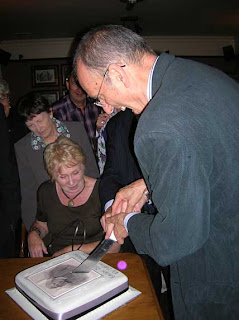 Posted by Mrs Woffington at 23:42 No comments:

If you can't make her event in London in November, there's another chance to catch the author Sarah Jane Downing talk about her book on English pleasure gardens on Tuesday September 29th at 4pm at the historic Lord Leycester Hospital in Warwick. After Downing's talk you can sample the 'famous Lord Leycester Hospital cream tea' and take a tour of the Master's garden, followed by a talk from Katherine Swift, author of The Morville Hours: The Story of a Garden, which delves into the history of The Dower House at Morville in Shropshire (£3.50 per event or £7.50 for both talks plus cream tea).

Posted by Mrs Woffington at 09:35 No comments: 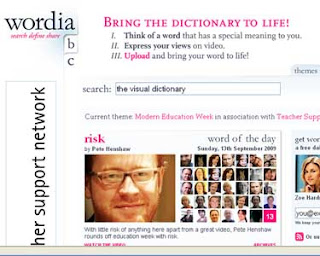 Dr Johnson would certainly have been interested in the site Wordia (pictured above) which invites people from all walks of life to think of a word that has special meaning to them, talk about it on video and have it uploaded into the 'visual dictionary'.

Tomorrow Dr Nicholas Cambridge - the Chairman of the Johnson Society of London and a former GP - will be talking about the word scrofula. You can leave comments on individual definitions or even link to uses of the word on Twitter (I'd venture to suggest that only Dr Johnson himself is liable to be tweeting about scrofula, but you never know).