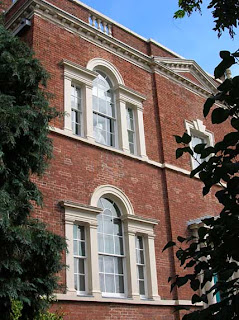 So we've been on the tour of the cellars, and have also been told that one of the ground floor rooms of the Erasmus Darwin House is haunted: a result of Dr Darwin having dissected so many dead bodies on the premises. But I must admit, the sight of the pale figure of Darwin himself, surveying Beacon Street from his top window, gave me a little start of surprise when I passed the other day. We always seem to be catching sight of him one way or another... Are the staff trying to give me a heart attack?

Word of the week: Hum Trum

A musical instrument made of a mopstick, a bladder, and some packthread, thence also called a bladder and string, and hurdy gurdy; it is played on like a violin, which is sometimes ludicrously called a humstrum; sometimes, instead of a bladder, a tin canister is used. 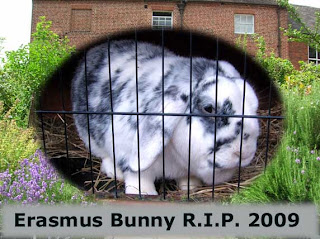 OK, so my Photoshop skills are hideous, but the point is, what happened to Erasmus Bunny II? When we went past his hutch at the weekend, we saw a rabbit, but it didn't look quite like the mascot of this very blog. It looked like a thinner and more lively version. Had they put Erasmus on a diet at last?

An enquiry at the Darwin House drew a blank, but the staff in the Cathedral bookshop told us that Erasmus Bunny II died peacefully in his sleep about a month ago and his son, Erasmus Bunny III, has now taken over the role of official Lichfield Cathedral Rabbit. As Johnson said of Pope in his Lives of the Poets: "The death of great men is not always proportioned to the lustre of their lives." I think we can say the same of this portly - sometimes grumpy - but very important rabbit. 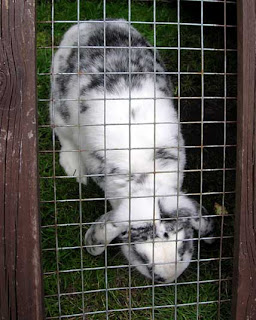 You might already know that BBC Radio 4 has chosen Samuel Johnson for episode 6 of its Great Lives series, hosted by Matthew Parris. In this episode, 'Boris Johnson, the Mayor of London, nominates Samuel Johnson, writer of the great dictionary. Dr Johnson's biographer, Peter Martin, joins the discussion.' It's already been on once, but there's a final chance to catch it this Friday at 11pm.

Flicking through the TV channels at the weekend, we were surprised to stumble across a screening of an amazing documentary, Peter Watkins' Culloden from 1964, which BBC4 had dug up from the archives.

What a brilliant, compelling film. It dissects the 1746 Battle of Culloden, but it's no dry historical account. Watkins shot it like a docudrama, as if a war reporter had entered the battlefield with a hand-held camera and was interviewing people from both sides of the conflict. Despite the lack of modern 'special effects' - or the fact that you don't actually see a lot of the violence - it was brutal and shocking, perhaps because Watkins captures the psychology of warfare so beautifully, gaining first-hand accounts from everyone - from the Duke of Cumberland (pictured above left) to the individual clansmen and their families.

If Watkins does come down somewhat heavily on the side of the Highlanders - butchered indiscriminately by the English, even after the conflict was over - it's an impressive work because it takes away the romantic notions of 'Bonnie Prince Charlie' and replaces them with the horrors of real war. What makes Watkins' film such a masterpiece is that you're no longer learning about history, as from a distance, but somehow inside the conflict in the most visceral way possible. I'm very interested in the Jacobites (and am writing about the '45) but have never seen anything like this before. 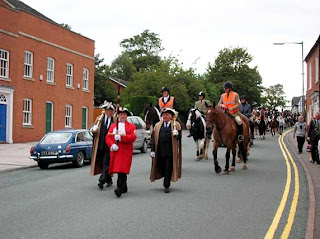 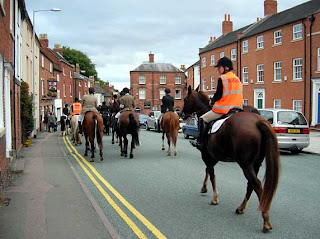 We'd just popped over to the pub on Saturday, when the traffic began to slow and we realised that the Sheriff's Ride was going past. The tradition dates back from Queen Mary's Charter of 1553, in which Lichfield was a county in its own right, and the Sheriff had to 'perambulate the new County and City annually on the feast of the Nativity of the Blessed Virgin Mary, 8th September'. Presumably they schedule it for the closest weekend each year.