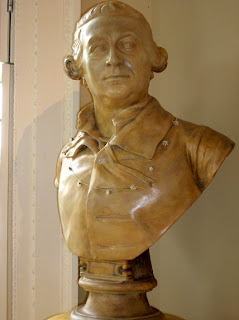 Just stumbled across an extraordinary blog, Undying Faces, which is dedicated 'to the history and preservation of life and death masks'. Death masks do have a certain uncanny appeal - check out the one of David Garrick: it looks so much like many of his portraits (complete with the big Huguenot nose!) and the one of Swift gives me the shivers. For a complete run-down of masks from the 1700s, click here.

Above: bust of David Garrick from Garrick's Temple to Shakespeare.

Word of the Week: Puddingtime

1. The time of dinner; the time at which pudding, anciently the first dish, is set up the table.
2. Nick of time; critical minute.

Mars that still protects the stout,
In puddingtime came to his aid.
- Hudibras.

From: Samuel Johnson's Dictionary of the English Language: An Anthology

A Note on Raw Fruit 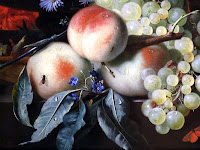 'In the days of Voltaire and Franklin, many of the vegetables that we know today were available, for example cabbages, turnips, carrots, parsnips and onions... Tomatoes were first discovered as a weed in the maize fields of the New World and were not eaten in Europe until the late 18th century and then only when cooked. The first tomatoes to be brought to Europe were yellow, hence the Italian name pomodoro [golden apple]. Later the Jesuits sailed back from the Americas with red tomatoes. In America it was Thomas Jefferson who first started to cultivate tomatoes in his garden at Monticello. By the end of the 19th century people in Europe finally started to eat raw tomatoes as well. Raw fruit was finally acknowledged by the medical world to be a safe and healthy food; hitherto it was believed to cause colic and spread the plague.' 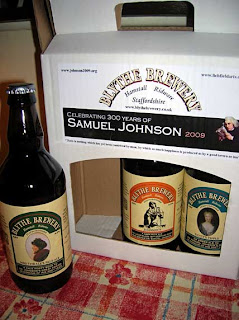 Finally got hold of the Tercentenary tipples, and I think so far, Mrs Thrale's Pale Ale (pictured front) is a definite favourite.

The Word from the Walkers

According to their blog, the Tercentenary walkers are on schedule to reach the Guildhall on Thursday. Yesterday they reached Berkhamsted, and 'were delighted to spend a whole day without being rained on once. They had a nice cup of Earl Grey tea at Woody's Cafe'. There's some great pictures of them in costume at Stony Stratford, where they were accompanied by Monty the Shetland pony and Murphy the Irish draught horse (who likes to drink stout).


PS Check out Granny Buttons for a post on the shopping trolley incident.

Posted by Mrs Woffington at 10:15 No comments: 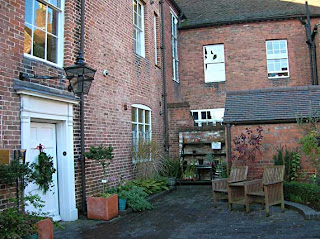 March 25th 2009 marks the 200th anniversary of Anna Seward's death, and though I could hardly expect the level of attention that's been paid to Samuel Johnson's this year, I did feel a bit sad that Lichfield - the city with which she is most strongly identified - wasn't doing more to commemorate her.

I was glad I didn't write a long rant about this, though, since Erasmus Darwin House (pictured above) has come to the rescue with an illustrated talk by Seward scholar Marion Roberts, scheduled for 7pm on Tuesday March 24th - the day before her 200th (tickets are £5). There's also an exhibition at the House, celebrating Seward's contribution to 18th-century Lichfield and her relationship with Erasmus Darwin (Mar 24 to Apr 19).

Handily, I've also just been given the new reprint of Anna Seward and Classic Lichfield

by Stapleton Martin (originally published in 1909) so I can do some swotting up on the 'Swan of Lichfield' before Roberts' talk.