Mrs Pitt and Congreve's The Way of the World 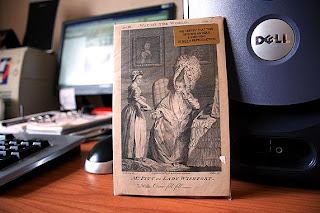 When I jokingly said to my partner, who was at a loose end in London yesterday, 'look for something 18th-century that I can blog about' I didn't expect that he'd come back with this lovely engraving. It shows Mrs Pitt as Lady Wishfort in Congreve's The Way of the World and was printed on October 26th 1776. As you can see from the label, it's an original, not a reproduction (and the lady in the shop was at pains to back this up apparently).

It comes from a line of print/bookshops in Cecil Court, off St Martin's Lane, which Mr Woffington stumbled on entirely by chance. The shop was a bit of an Aladdin's cave and had a large selection of theatrical prints from the 18th and 19th centuries.

Mrs Pitt appears to be lost in the mists of time, but The Way of the World still survives: a comedy about the lovers Mirabell and Millamant whose union is opposed by Millamant's dreadful aunt, Lady Wishfort. There are some extracts from the play (including the scene depicted on my engraving) on an excellent CD called An 18th-century Comedy Album with Dame Edith Evans playing the imperious Lady Wishfort. If you can track it down it's well worth a listen.

Subscribe now!
Posted by Mrs Woffington at 16:23 No comments:

Boom and Bust in 18th-century Yorkshire 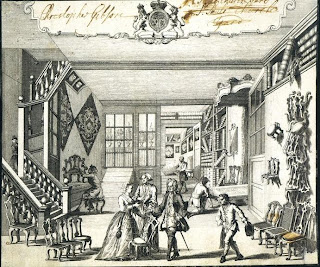 Trade card, 1730-1742, V&A Museum
With Britain on the cusp of a new coalition government - an alliance that will have to tackle major economic problems - I thought this news item from the University of York might draw some interesting parallels with boom and bust, 18th-century-style.

I talked a while back about Tulipomania and the South Sea Bubble, but in this instance, economic ruin threatened the people of Yorkshire, who were not taking it lying down...

The coming of Industrial Revolution in the latter part of the 18th century changed West Yorkshire from a remote landscape to an industrial powerhouse. Because of the fertile pasture land where sheep could be raised, and the soft water - handy for cleaning wool - Yorkshire was particularly suited to the developing textile trade. As steam power was explored, the coalfield south of Leeds would also come into play as a source of energy for the machinery.

Yet, despite the consumer revolution of the 18th century - which saw the market for luxury goods expanding to tempt a new middle-class - cash was in short supply and the markets could be volatile. When the wool trade suffered a decline in the 1760s and 1770s, hundreds of people from rural Yorkshire communities took matters into their own hands and began counterfeiting British and Spanish coins to save themselves from poverty.

1787 Proclamation Shilling
The Yorkshire Coiners, as they were known, were concentrated around Halifax and led by a ‘royal family’ of King David (David Hartley) and his brothers, known as The Duke of York and The Duke of Edinburgh. In the 1700s counterfeiting was a serious offence - punishable by hanging - and the Government took the matter seriously, sentencing many of the gang to death at York's Tyburn. Yet the characters live on in the old ballads, and many people today can trace their ancestry back to members of the The Yorkshire Coiners.

And in a further interesting twist to this story, soon the plucky northerners will be immortalised on film. Original research on the coiners by University of York historian, Dr Hannah Greig, has led to a collaboration with Harrogate-based film-maker Peter Kershaw who is making a feature film called The Last Coiner, which promises to give a more accurate flavour of life in 18th-century Britain than your average period drama. Check out The Last Coiner movie site and the Official Movie Blog for more details.

And... please don't try this at home!

Posted by Mrs Woffington at 14:12 No comments: