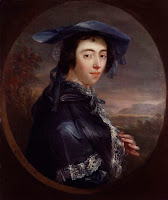 I’ve been horribly remiss with the blogging lately, but I’m back again with the cheering news that the Peg Woffington Cottage in Teddington (pictured here) has hit its 250th anniversary - an occasion marked by a coffee, birthday cake and champagne morning party held by The Teddington Society. I’m sure she would have approved. I went there once, having expected it to be open as a tea room, but the elderly owners had retired. Looks like they have some nice portraits of the Wof either side of the fireplace though, including Margaret ('Peg') Woffington by John Lewis (1753, above left). The cottage itself seems to be one of several almshouses she endowed rather than her own house, which was a grand building called Teddington Place on the banks of the Thames (long since demolished, sadly).