Extraordinary Popular Delusions and the Madness of Crowds

The housing market has collapsed and the economic forecast is grim, but as my partner remarked the other day, it's no different from Tulipomania.

Tulips first caught on in a big way at the start of the 17th century, when French women began wearing them in corsarges. The fashion spread quickly to the Low Countries, and in due course, the Dutch were seized with tulip frenzy. Huge sums of money changed hands for small beds of tulips, and the bulbs themselves became a kind of currency, with many buying them at inflated prices purely to sell them on. People abandoned perfectly good jobs to cultivate the flower and others speculated in tulip shares; fashionable women began wearing fabrics depicting the sought-after flower. Then, in February 1637, the prices skyrocketed beyond all reason, and the bubble burst.

Journalist Charles Mackay later renewed public interest in Tulipomania in his book Extraordinary Popular Delusions and the Madness of Crowds (1841).

Another event that Mackay covered was the frenzy of speculation on The South Sea Company in the early years of the 18th century, leading to the famous South Sea Bubble (see above left for an illustration from Mackay's book of headlong fools plunging into South Sea water). At its peak in 1720, people invested in a company that advertised its business as: 'carrying out an undertaking of great advantage, but nobody to know what it is'.

Any of this sound familiar? Rest assured, history does repeat itself...

Word of the Week: Simples

Physical herbs; also follies. He must go to Battersea, to be cut for the simples -- Battersea is a place famous for its garden grounds, some of which were formerly appropriated to the growing of simples for apothecaries, who at a certain season used to go down to select their stock for the ensuing year, at which time the gardeners were said to cut their simples; whence it became a popular joke to advise young people to go to Battersea, at that time, to have their simples cut, or to be cut for the simples.

I was looking at the wonderful 18th-century blog and admiring the post on Antoine Pesne when I recognised an old friend: Barbara Campanini, painted here by Pesne in 1745 (left). I say old friend because I'd come across her briefly in Ian McIntyre's excellent biography of David Garrick; she appeared on the same bill as David Garrick and Peg Woffington at Dublin's Smock Alley theatre in 1742. Famed for her tambourine dance, with an extraordinary knack for quick turns and jumps, Prussia's Frederick the Great admired her 'boyish legs' and her skill with the entrechat quatre (where the legs cross four times at speed) was highlighted by her adoption of a slightly shorter skirt - as seen in this picture.

Posted by Mrs Woffington at 09:05 No comments: 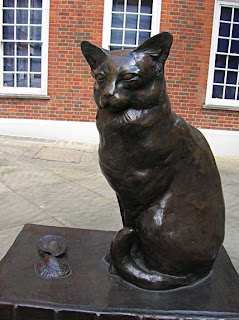 I promise not to turn this into a cat blog, but I felt I had to mention that things feel slightly weird at home because we just got out first ever cat, Boris (below). He's very nervous and very big, and enjoys nipping the hand if he feels liberties have been taken. I think, when he stops being so scared and hiding underneath the sofa, he could end up developing a tremendous, Johnsonian personality.

But what of Johnson's cats? His most famous cat is Hodge (pictured above in statue-form at Johnson's House in Gough Square), whom I mentioned in an earlier post. And you'll no doubt recall Johnson's tactless remark to Boswell that he'd had 'cats whom I liked better than this', which was quickly qualified with: 'but he is a very fine cat, a very fine cat indeed'. So who were Johnson's other cats? We don't know their names, but as Dr Graham Nicholls says in his excellent pamphlet, Dr Johnson's Cats: 'one of them makes its mark on Johnsonian biography when Johnson objected to his wife [Tetty] beating it because she was setting a bad example to the maids'!

He seems to have owned Hodge in the late 1760s. The name is a version of Roger and is a traditional name for a countryman, so Nicholls speculates that Johnson perhaps brought him back as a kitten from one of his many trips to the country. When the cat was close to death, such was Johnson's tenderness, he went out and found it valerian (a plant similar to catnip) to make his last hours as comfortable as possible

In case you wondered, our cat is named after another big personality: the Mayor of London, Boris Johnson. 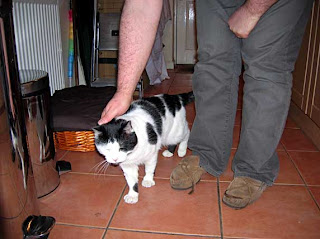 At home with Ben Franklin

So, I promised a post on Benjamin Franklin's house, and here it is. I was very excited about this house, situated in a narrow street close to Charing Cross Station, because, amazingly, it's the only surviving Franklin residence (he rented it, rather than owned it, but said he'd spent some of the happiest years of his life there). Between 1757 and 1775 he shared it with his widowed landlady, Margaret Stevenson, and her daughter Polly. 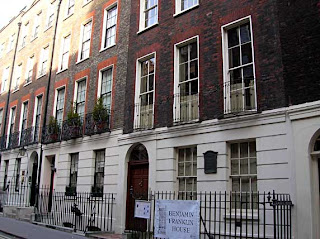 In 1913, there were red faces at the London Council Housing Division when they discovered they'd mounted Franklin's wall plaque on the wrong house in Craven Street; the correct one was two doors up from Craven Lane - now Craven Passage - and the plaque was moved from no.7 to no.36 (see above and below for pix of our approach). 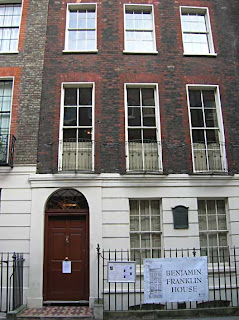 In many ways this was the opposite of our experience at The Foundling Museum because there is really nothing left from the period except the house itself (built circa 1730 - and even then, the building was remodelled slightly in the Regency period). The guide told us it was the Empire Hotel in the 19th century, then became derelict, narrowly escaping destruction during World War II when a bomb fell into the back courtyard. Luckily it failed to explode. 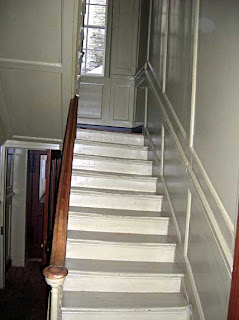 As you can see, the interior has been beautifully restored (above is the central staircase on which Franklin was supposed to have done his daily exercises). Yet because there are no exhibits as such, the museum takes a 'living history' approach, inviting visitors to follow its Historical Experience (you've got to do this otherwise you'll only have access to the courtyard and the shop!)

It began down in the chilly basement: the location of the Craven Street bones (thought to be the remnants of an 18th-century anatomy school). Here we were shown a short film about Franklin's life, although Georgian gremlins meant that the sound cut out a few seconds in, and because the Experience runs on a tight schedule, we couldn't get in re-started. While we were debating with the other visitors what to do, a woman burst through the door in period costume, introduced herself as Polly, and led us through into the next room... 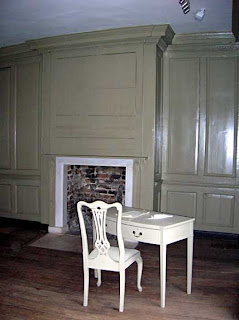 'Polly' works to a script which is cleverly interleaved with sound effects and recorded speech (it really felt like going back in time, following this woman down a dark corridor, a babble of voices coming from behind the door). The blank walls are used to project imagery and quotations from Franklin's works (Peter Coyote is the voice of Franklin while Imelda Staunton is Margaret Stevenson). It's very effective, though it goes at quite a pace. You can see Franklin's writing table in the picture above, and below is the balcony. 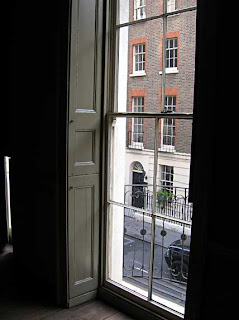 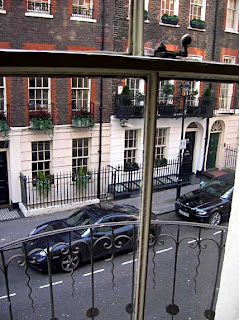 It seems that Franklin took 'air baths' in his room every day. He said: 'I rise early almost every morning and sit in my chamber, without any clothes whatever, half an hour or an hour, according to the season, either reading or writing.' He apparently sat naked in front of the open windows of his second-floor parlour (above). Imagine what the neighbours made of it! See below for a short tour of the room I was just talking about.

After the essential browse in the shop afterwards I picked up a curious book called Benjamin Franklin Book of Recipes by Hilaire Dubourcq which combines recipes of the day with dishes of Franklin's invention and quotes from his writings. There's some entertaining stuff about his vegetarianism, among other things. Describing his decision to eat fish again, he explained: 'but when this [fish] came hot out of the frying-pan, it smelt admirably well. I balan'd some time between Principle and Inclination; till I recollected, that when Fish were opened, I saw smaller Fish taken out of their Stomachs. Then thought I, if you eat one another, I don't see why we mayn't eat you. So I din't upon Cod very heartily... So convenient a thing it is to be a reasonable creature, since it enables one to find or make a Reason for every thing one has a Mind to do'.

I leave you with the recipe for Franklin's Hot Flannel:

Add gin to the warmed ale. Stir in sugar and nutmeg. Serve.