In Search of Mrs Woffington (Part 2) 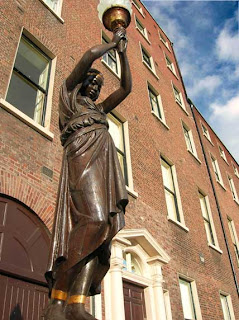 One of Dublin's grand Georgian thoroughfares
Apart from our trip to Teddington in Part 1. we also made a slightly more ambitious journey to Dublin, where Mrs Woffington was born and bred. Mainly I wanted to see the site where the famous 18th-century theatre, Smock Alley, had stood in the 1700s. It's still a narrow street but what I didn't realise was that there's a contemporary studio theatre on roughly the same spot (my photographs of it are here).

Wandering around Dublin with a modern A-Z and a photocopy of an 18th-century map was fascinating and memorable, but as with our trips to London, we had trouble finding anything much dating from Peg's childhood in the 1730s. Yes, Dublin is a truly magnificent Georgian city, but constantly we stumbled across the problem that the street plan was extensively remodelled by the Wide Streets Commission from the mid-1750s, so that the Dublin of the early 18th century no longer exists. 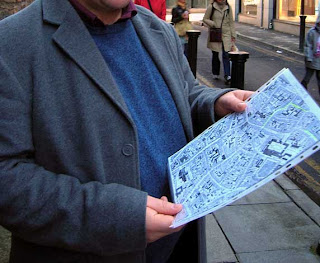 With a photocopy of Rocque's map of Dublin from 1756: the street plan of Temple Bar remains virtually unchanged but the buildings are different
The circumstances of Peg's childhood are surrounded by conjecture, but following the sudden death of her father (one writer claimed he fell off a ladder), debts began mounting and the Woffington family (mother, Peg and baby sister Polly) were forced to eke out a living in a low cabin, with Peg selling watercress door-to-door.

At some time around 1727 she seems to have been discovered by a celebrated rope-dancer called Madame Violante, who had set up a tumbling booth in Fownes Court and Peg got her first theatrical engagement, as a singer. Take a look at the picture below of Fownes Street Upper and despite the modern facades, the upper sections of the buildings are clearly early 18th-century panelled houses. These narrowly escaped demolition in the 1980s when the state transport company, CIE, proposed that a new bus station be built across the site. 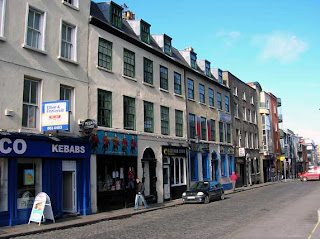 Fownes Street Upper, Temple Bar
Of course, there was one thing we knew existed during Peg's lifetime and that was Dublin Castle: a powerful social and political symbol with a complex history. In the 18th century it would have been the Protestant Ascendancy's seat of power; early in the century it hosted the viceregal levee: a formal reception held just after the grandee had risen from bed, usually held on a Sunday. The Castle would also host the usual round of banquets, state balls and 'drawing rooms' (card parties for ladies), with the season ending on St Patrick's Day with a special ball.

The Castle as Peg would have known it: from Charles Brooking's
map of Dublin in 1728 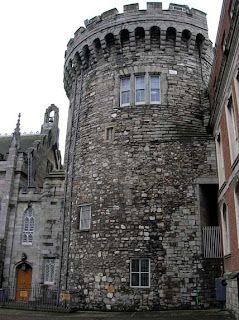 Dublin Castle's 13th-century Norman Record Tower, 2007.
As you can see from the picture above, Dublin Castle is a Norman construction which has much in common with the castles of Wales with their round towers; the Castle still had a moat (formed by the River Poddle) in the Georgian period, but by this time it was redundant and filled with rubbish.

The British administration never rebuilt the medieval castle as a single piece of architecture however; derelict parts were patched here and there, resulting in the mix of buildings we see today. Under the gaze of the Wide Streets Commission, the gate at Cork Hill (below), the Guard House and Court Marshall Room were all completed in 1751, and the Upper Castle Yard itself was extensively remodelled, so even this isn't a true picture of early 18th-century Dublin. Only the old maps can come close to recreating the Dublin that Peg knew as a child and young woman. 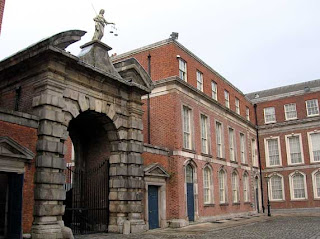 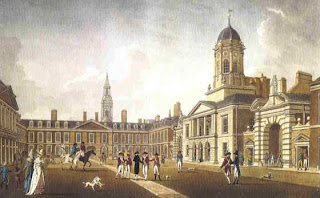 I was lucky enough to find several fantastic books that really helped me to imagine Dublin before the work of the Wide Streets Commission. I can highly recommend Peter Pearson's The Heart of Dublin: Resurgence of an Historic City which is an utterly passionate account of the unknown areas of Dublin; I'm indebted to Pearson's work throughout this blog post. I was also hugely excited to find - in the bargain bin of Dublin's City Hall gift shop - A Directory of Dublin for the Year 1738, published by the Dublin Corporation Public Libraries in 2000. I got a thrill when I looked up Margaret Woffington in the index and found her listed as 'actress, Theatre Royal, Aungier Street' and a resident of Jervis Street: a surprisingly well-to-do area, judging from the professions of her neighbours, north of the river. And although it depicts the new Dublin emerging in the final decade of the 18th century, Colin Smythe Ltd's pocket-sized edition of Malton's Georgian Dublin: 25 Aquatints is simply a joy to behold. 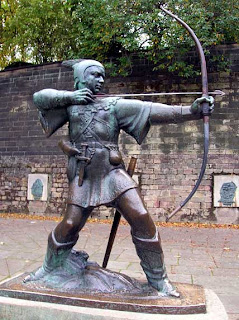 I'm pleased to say we made it to Nottingham (home to Robin Hood, above) just in time to catch the last few hours of the Paul Sandby show. It was held at Nottingham Castle's splendid Art Gallery (below) and seemed to be attracting quite a few crowds right to the last. 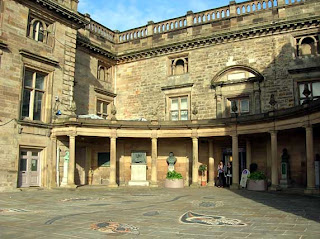 The show started off with some of Paul's (and his elder brother, Thomas's) early topographical works. This was particularly fascinating for me because the beginning of Sandby's career coincided with the failure of the 1745 Jacobite Rebellion; the army's Board of Ordnance was ordered by the Duke of Cumberland to make a 'compleat and accurate survey of Scotland... that a country, so very inaccesible by nature, should be thoroughly explored and laid open'. 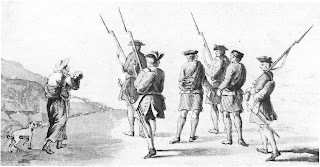 Paul Sandby: The taking of Jacobite prisoners
Sandby's role, in 1747, was as chief draftsman, mapping the recent war zone, Culloden, which he did so with the greatest detail. But his sketchbook, showing the military dress of an English soldier, and his off-duty works of Edinburgh street life, really bring the period to life and reveal Sandby's eye for comic detail.

This combination of technical dexterity, wry humour and urban commentary brings Sandby straight onto the patch of William Hogarth - something easily seen in Sandby's Twelve London Cries Done From Life (published 1760) showing such down-and-outs as the milkmaid, entertaining the vulgar crowds with a raree-show (or peepshow), the raucous mackerel-seller, and the hawker of a low ballad about the celebrated prostitute, Kitty Fisher. The accompanying collection of satires on Hogarth I have mentioned already and are crammed with vicious and obsessive detail.

Paul Sandby: View to the East from the Gardens of Somerset House
But perhaps Sandby's greatest achievements are the depictions of cities such as London and Nottingham, particularly his breathtaking views (from the East and the West) from the Gardens of Somerset House (above) which find Sandby committing to paper an incredibly accurate view of 18th-century London. Thanks to Sandby's camera-like eye, these two large canvases give a great sense of space to the viewer, as if they are actually standing on the riverfront terrace outside old Somerset House, admiring the magnificence of the London skyline.

Later views of Windsor have the tinge of romanticism that was less appealing to me than his honest images of 18th-century city life. Other highlights were Sandby's view of rush-hour at the tollgate near his home and a small watercolour of an artist's studio in St George's Row, Bayswater, which could have been either Sandby's own, or his 'dream studio', complete with a grand classical archway. 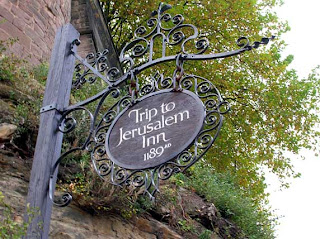 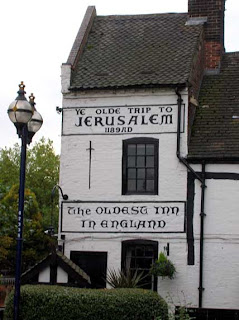 After such an enjoyable exhibition, it seemed only right to make a detour to Ye Olde Trip to Jerusalem - established 1189 AD and reputedly the oldest pub in England (above) - which consists of a series of caves, hewn from the rock on which Nottingham Castle sits. We had a drink in the rock lounge, which seems to have been the original brewhouse, judging from the passageway/chimney above our heads (used for winching the kegs up into the Castle).

There's plenty to occupy the tourists including The Pregnancy Chair (below): believed to have the power to make any woman who sat on it conceive a child, and the Cursed Galleon: covered by what looks like 50 years of dust and deadly to anyone who attempts to clean it! 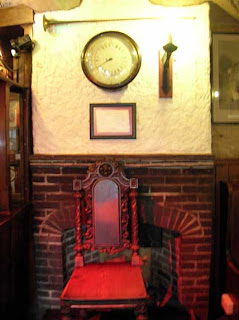 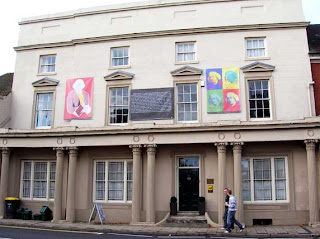 Last week we were a bit startled to see the front of St John's House in Lichfield adorned with pop art takes on Samuel Johnson (above right) and David Garrick (above left), with a dictionary definition in the middle. It's a bold look for a grade II* listed Georgian building.

The three works are part of Lichfield's 52 Weeks of Art project and will be displayed on the front of the new boutique bed and breakfast for the next month. They're part of a series of 26 artworks - designed by professional and developing artists, students and schools - which will be popping up around Lichfield over the next six months. To quote St John's website:

The series will depict different art styles of the 20th century but with a twist as they all have a link to Lichfield. The first three duly show reworkings of Andy Warhol, with a pop art version of Samuel Johnson; Rat le Bek with a street art interpretation of David Garrick and Joseph Kosuth with a dictionary definition of the historic uses of the poster.

What next? A Banksy-style portrait of Erasmus Darwin?