Handel... in the nude

It's funny what you stumble across on research trips. Here are a couple of pictures from a trip I did to Dublin. We paid a visit to Fishamble Street because I wanted to see the site of Neal's Musick-hall, where Handel's Messiah was premiered in April 1742, and we did actually find the remains of the doorway (below), which stands alongside what's now the Handel Hotel. 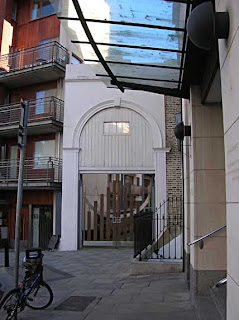 But as we were inspecting the gate, we caught sight of something in the courtyard beyond. A sculpture of Handel, perched on some organ pipes with his, er, kit off. Now, I don't know about you but I don't remember the maestro appearing in public without his wig, let alone his clothes, and he certainly wasn't that athletic. And if we're going to get all technical, he probably wouldn't even have conducted with a baton. But hey, that's the least of our worries. 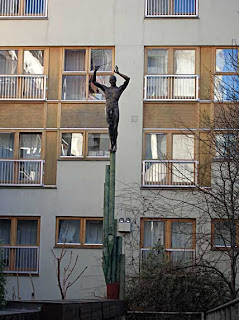 I'd love to know who sculpted it, or what indeed Herr Handel would have made of it. I don't think he was known for his sense of humour!

Sorry Mrs Woffington, I seem to have stumbled into a Carry On Film. Your post made me snigger into my bottle of water.

Hee hee! Or insert amusing caption about organs. The list is endless!

Mrs Woffington-I am quite frankly shocked. I know you're an eighteenth century actress, but your shamelessness knows no bounds madam!

I always was a bold-faced hussy. :)

Poor old Handel... I often wonder what folks from back then would think of our 'modern' era and our interpretations of them.

Of course as a reenactor, I WOULD think things like that I suppose.

Could they be referring to the tradition of Greek and Roman statues do you think, with the nudity? It's so unusual to get a nude statue of a historical figure... even now it's unthinkable. I do wonder if it was actually of someone else - my guidebook said Handel, but they could have just stuck it on Fishamble Street for a bit of a laugh.

Many thanks for the nice photoes and funny comments!
IMHO, Handel should have been amused and perhaps even pleased with this statue - he was an art lover and kept in his London house some pictures with nude heroes.