Nelson... in the nude 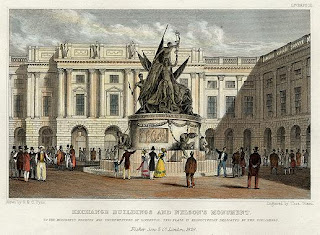 Exchange Buildings and Nelson's Monument engraved by Thomas Dixon after a picture by G & C Pyne, published in Lancashire Illustrated.

Following on from my posting on Handel's nude statue in Dublin here's my latest discovery: Liverpool's statue to Lord Nelson. It might not have been the first tribute to the war hero in Britain (that honour goes to Birmingham's Nelson statue, erected in 1809), but I think you'll agree, it's a very fine one. 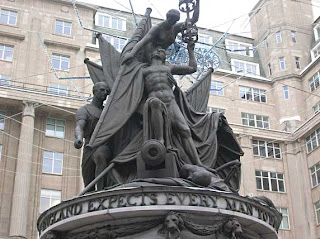 Matthew Cotes Wyatt's sculpture (1813-15) is located behind the Town Hall, in Exchange Flags, and features Nelson astride a canon, death emerging from beneath a draped flag to claim him at his moment of victory (he's also completely nude, ladies).

It's a singularly rum business. Most contemporary sources indicate that Nelson fought all his major actions, even the Nile, while fully clothed. Is it possible that - like the Achilles statue in Hyde Park - the Liverpool memorial was subscribed to and commissioned by Liverpudlian ladies?

Having seen what goes on down Mathew Street after midnight most Saturdays, I can only say that I wouldn't put it past them.

Yes, there's no figleaves for the ladies of Liverpool!

I'm trying to think of something vastly superior and intelligent to say, but can only think of Nelson's cannon as an extension of his...er...masculinity...snigger

I could make a joke about Nelson's Column... but I won't.

Ladies, the golden age of female wit is clearly not dead. Laetitia Pilkington would be proud.

Hee hee. 'The life of a wit is a warfare upon earth,' as Pope said. This is merely a warfare against taste, sir.

Well, in that case, I'll merely add that Emma Hamilton, honest Wirral lass that she was, might possibly have disagreed with the assertion that Nelson performed his greatest feats while fully dressed.

And with that, madam, here's to the Immortal Memory of the Norfolk Hero!

I'll drink to that!

Me too...and long may the double entrende reign...