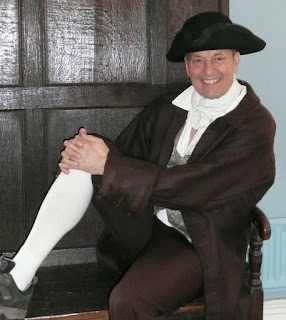 The UK celebrations for Samuel Johnson’s Tercentenary officially kick off on Monday, which is the 272nd anniversary of Johnson and Garrick's journey from Lichfield to London.

) and Dr Nicholas Cambridge (Chairman of the Johnson Society of London, pictured above), will be marking the event in athletic style by recreating the 165-mile walk over a period of 11 days, culminating in a reception at London’s Guildhall on March 12th.

The walkers set off from the Birthplace Museum in Lichfield at 9am on Monday, following the route of the Hatherton Canal Trust restoration project towards Huddlesford Junction. I caught up with Dr Cambridge (stepping in for David Garrick) for a chat about the event.

How did you first get interested in the Georgian period, and in particular, what attracted you to Johnson's works?

I became interested in the Georgian period in 1976 when I was a medical student undertaking some research for an essay prize into medical electricity. People from the 18th century, such as John Hunter, Benjamin Franklin and John Wesley came up. However, it was not until 1984, the bicentenary of Samuel Johnson's death, that I became interested in Johnson. My interest was catalysed when I attended a symposium at the Wellcome Institute (as it was then called) on ‘Vigorous Remedies’ and I heard the late Roy Porter give a brilliant talk. I also started to collect books about the 18th century and in particular Johnson. The rest is history.

Is there much known about the route that Johnson and Garrick took, and are you trying to replicate it or has that not been possible?

We know that Johnson and Garrick walked down the main coaching route from Lichfield to London using ‘horse and tie’. They passed through Coleshill, Coventry, Dunchurch, Daventry, Towcester, Stony Stratford, Dunstable, St Albans, High Barnet and on into London. However, we are using the canal paths as it is too dangerous using the roads. Apart from the safety aspects the canal route (mostly down the Grand Union Canal) will be much more pleasant. The canal route will take us through Birmingham, Solihull, Warwick, Daventry, Blisworth, Milton Keynes, Leighton Buzzard, Berkhamsted, Norwood Green, Barnes and then along the Thames towpath to the Guildhall. You can follow our daily blog from the website.

There are so many myths around Johnson (not least his claims of having just 'two-pence halfpenny' in his pocket when setting out for London). Why do you think these myths are so important to us today?

It gives us an example of how much things cost during Johnson’s lifetime and also shows us how poor Johnson was for much of his life. For example Johnson once remarked that he could dine very well for eight pence (a cut of meat for six pence, bread for a penny and he gave the waiter a penny).

What do you make of Johnson's relationship with Garrick?

Garrick was nine years younger than Johnson and was a pupil in Johnson’s school at Edial and therefore their relationship was not close. After they arrived in London in 1737 their paths diverged as they pursued differing careers. Whilst Garrick started to make a name of himself on the stage Johnson by contrast struggled to make a living by writing until the success of his Dictionary in 1755. In public Johnson would have been complimentary about Garrick’s success whereas in private he would have jealous. Johnson also did not like Garrick’s social climbing, name dropping and vanity. Sadly Garrick predeceased Johnson by five years and died in 1779. Johnson openly wept at Garrick’s funeral at Westminster Abbey where they are both buried side by side in Poets' Corner.

Do you have a favourite Johnson quote, or one that sums up your feelings about the journey that you're about to undertake?

The following quote is relevant to our walk: ‘Incidents upon a journey are recollected with peculiar pleasure; they are preserved in brisk spirits.’

To sponsor Nicholas Cambridge, please click here. The first 100 supporters to join the walk will receive a Waitrose goodie bag.

What a fantastic enterprise! I'm sure many characters will be met along the way. A very interesting interview too, thank you!

Thanks Heather - I admire them walking that distance; I'm sure I'd be hobbling after five minutes...

And good to see a shout-out to the thoroughly splendid chaps at the Lichfield and Hatherton canal restoration trust, too. They're doing fantastic work. A few years ago, they forced the builders of the M6 Toll Road to put in an aqueduct ready for the day when they re-open the canal - but I cou;ldn't help thinking: in an ideal world, that wretched, pointless monstrosity of a road would never have been built and the mone spent on re-opening the canal complete, there and then! In the words of Dave Gorman: All freight on the canals!

A worthy cause indeed; it's amazing to see the shape of that old canal springing up from beneath the grass. I see it was originally opened in 1797 - a bit late really. James Brindley's suggestions for improved transport links went unheeded, though this did probably save the city from becoming an industrial wasteland - like Birmingham.

What an interesting blog, introduced by a thought-provoking photo. The unusual wall painting of the dwellings is also a strangely modern interpretation. Something like this hieroglyphic view of a park by Swiss painter Paul Klee, http://EN.WahooArt.com/A55A04/w.nsf/OPRA/BRUE-8LT475.
The image can be seen at wahooart.com who can supply you with a canvas print of it.