Ode on the Death of a Favourite Cat

which has turned out to be a very elegantly written, very entertaining, read (see left). For those who don't know the story, some time in 1747, poor Selima the cat, who lived with Horace Walpole at his home in Arlington Street (this was before he moved to his gothic mansion, Strawberry Hill), got up on the rim of a large Chinese porcelain tub containing goldfish, fell in, and drowned. 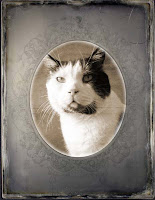 Walpole was, understandably, upset and wrote to his close friend, the poet Thomas Gray, asking if he would compose some sort of epitaph for the unfortunate creature. Gray replied saying that he couldn't begin to grieve properly until he knew which cat Walpole was referring to (his other cat was called either Zara, after the heroine of Voltaire's The Tragedy of Zara or Zama, nobody seems sure which). Once the identity of the cat had been cleared up, Gray enclosed the first draft of the poem that would become Ode on the Death of a Favourite Cat (see full text below). 'There's a poem for you,' said Gray, 'it is rather too long for an epitaph'. 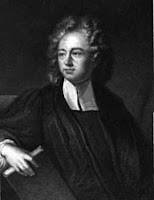 Apart from Frayling's expert biographical slant on the poem and his analysis of it in terms of 18th-century culture, another joy of Horace Walpole's Cat

are the huge reproductions of Richard Bentley's quite wonderful engravings. There's a full reprint of Bentley's (pictured left) explanation of his Frontispiece which just as much of a mock-heroic masterpiece as the poem itself. Witness 'the cat standing on the brim of the tub... Two cariatides of a river god stopping his ears to her cries, and Destiny cutting the nine threads of life... At the bottom are mice enjoying themselves on the prospect of the cat's death; a lyre and a pallet.' Fantastic stuff. 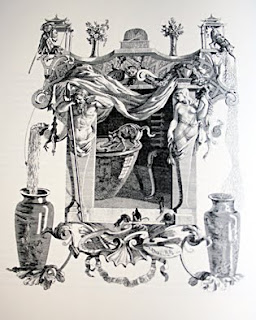 Ode on the Death of a Favourite Cat,
Drowned in a Tub of Gold Fishes.
I.
'TWAS on a lofty vase's side,
Where China's gayest art had dy'd
The azure flowers, that blow;
Demurest of the tabby kind,
The pensive Selima reclin'd,
Gaz'd on the lake below.
II.
Her conscious tail her joy declar'd;
The fair round face, the snowy beard,
The velvet of her paws,
Her coat, that with the tortoise vies,
Her ears of jet, and emerald eyes,
She saw, and purr'd applause.
III.
Still had she gaz'd: but 'midst the tide
Two angel forms were seen to glide,
The Genii of the stream:
Their scaly armour's Tyrian hue
Thro' richest purple, to the view
Betray'd a golden gleam.
IV.
The hapless Nymph with wonder saw:
A whisker first, and then a claw,
With many an ardent wish,
She stretch'd in vain to reach the prize.
What female heart can gold despise?
What cat's averse to fish?
V.
Presumptuous Maid! with looks intent
Again she stretch'd, again she bent,
Nor knew the gulph between.
(Malignant Fate sat by, and smil'd)
The slipp'ry verge her feet beguil'd,
She tumbled headlong in.
VI.
Eight times emerging from the flood
She mew'd to ev'ry watery God,
Some speedy aid to send.
No Dolphin came, no Nereid stirr'd:
Nor cruel Tom, or Susan heard.
A fav'rite has no friend!
VII.
From hence, ye Beauties, undeceiv'd,
Know, one false step is ne'er retriev'd,
And be with caution bold.
Not all that tempts your wand'ring eyes
And heedless hearts, is lawful prize;
Nor all, that glisters, gold.

also explores Christopher Smart's For I Will Consider My Cat Jeoffry as well as Dr Johnson and his cats; follow the links above to see previous blog posts from me on these topics. And the cat in the frame, above, is my own cat, Boris.


Photographs © Memoirs of the Celebrated Mrs Woffington except the engraving of the Richard Bentley portrait, courtesy of Wikimedia Commons.

The Richard Bentley you're displaying a picture of died in 1742. He was a classical scholar. It was his son, also RB, who illustrated Gray's poem.