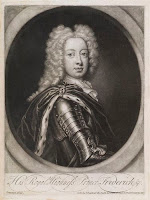 There's something else I wanted to recommend at the National Maritime Museum; on the ground floor they have an extraordinary object: the original barge built for George II's eldest son, Prince Frederick (left), in 1732. It's not a reproduction! This amazingly rich, gilded boat is one of the museum's largest objects at around 19.m in length, and now very delicate. It was designed by the architect William Kent and built by John Hall on the south bank of the Thames, opposite Whitehall. There's some very elaborate carving on the front done by James Richards, who succeeded Grinling Gibbons as master carver to the Crown in 1721. It features scallop shells, urns and acanthus leaves and everything is gilded in 24-carat gold leaf.

On the very first day it was afloat, the Prince used the barge to take his mother, Queen Caroline, and his five sisters, from Chelsea to Someset House to inspect the cleaning of the royal collection of paintings. On another occasion it attended a regatta at Woolwich decorated in the fashionable style of chinoiserie (which used fanciful Chinese imagery) with the footman and 21 oarsmen dressed in Chinese costume. It was to make its final appearance long after the Prince's death, in 1849, when Prince Albert was rowed to the opening of the Coal Exchange.

Amazingly, what we're seeing now was reconstructed from three pieces (the barge having been sawn up and stored in the Royal Barge House at Windsor Great Park for over 100 years). You can walk right alongside it and see the rather worn green velvet seats where the royal bottom would have been planted, while the ceiling is painted with a design representing the royal coat of arms. Given the crowded state of the London streets, this was probably a highly convenient - not to mention pleasant - way to travel!

what an amazing artifact to have made the passage of time intact! It's added to my list of 'things to see'!

Thanks for stopping by - it really is amazing. Sadly it's so fragile that you can't photograph it close-up (I had to do it from the second floor) but you can't beat the feeling of peering into this beautiful object and realising that it has survived virtually untouched. Its on the ground floor, just as you come into the Museum.