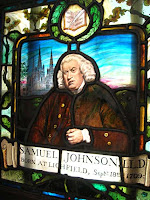 As a member of the Johnson Society in his birthplace, Lichfield, I've had the chance to attend some of his September birthday celebrations, which usually involve an annual dinner in the Guildhall. A few years ago, as my partner and I sat down to steak and kidney pie and glasses of Johnson's favourite punch, we were slightly startled by our neighbour leaning over and asking: 'Are you Johnson or Darwin?' It seemed like a bizarre question, but in retrospect this was just another version of that old 'town and gown' debate that's been going on since the early Middle Ages... The house of the great scientist and member of the Lunar Society, Erasmus Darwin, is located in the cathedral close, on rising ground to the north of the town, whereas Samuel Johnson's house (now the Samuel Johnson Birthplace Museum) is on the market square right in the centre of town. What part of Lichfield had we allied ourselves with - he was asking - the town or the cathedral?!
Posted by Mrs Woffington at 21:16