I thought you might like to see some photos I took in August 2007 on a research trip to Dr Johnson's London house at Gough Square, just off Fleet Street. 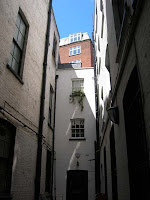 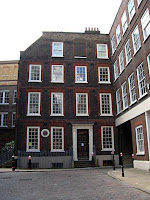 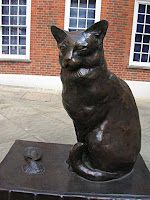 Above is Johnson's cat, Hodge, standing on the dictionary with oyster shells at his feet (oysters were a cheap food in those days and quite suitable for cats!) Boswell, in his Life of Johnson, immortalised Hodge thus: 'I recollect [Hodge] one day scrambling up Dr. Johnson's breast, apparently with much satisfaction, while my friend smiling and half-whistling, rubbed down his back, and pulled him by the tail; and when I observed he was a fine cat, saying, "Why yes, Sir, but I have had cats whom I liked better than this;" and then as if perceiving Hodge to be out of countenance, adding, "but he is a very fine cat, a very fine cat indeed."'

While we were there, we also visited Johnson's local, Ye Olde Cheshire Cheese, which is very close to the house. There's no hard evidence that Johnson ever went there, though you can sit on what the pub claims to be his favourite bench in the chop room, and there's even a chair suspended from the ceiling that was supposed to Johnson's. It's highly recommended for its food and authentic Georgian atmosphere - you can see from the last pic how dark it is in there! Note the portrait of Johnson and Boswell in conversation, hung above the doorway to the bar. Historically it's always been a popular meeting place for writers and journalists. 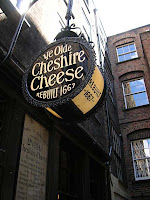 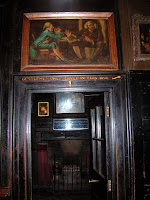 I had heard about his cat! Even the statue looks like a cat of status :) Fabulous post!

Thanks Eliza! Apparently Johnson bought Hodge's oysters himself because he didn't want to offend his servant 'seeing himself employed for the convenience of a quadruped'. He looks like a pretty pampered pet!