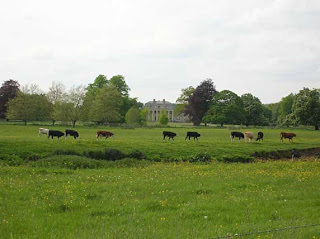 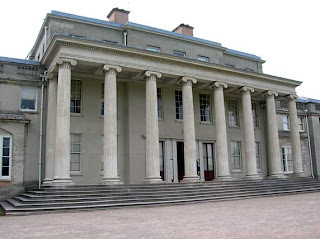 Bored at the weekend, and with no transport (my car having been vandalised three times - a Georgian city isn't always a genteel place to live) my boyfriend had the marvellous brainwave of a trip to the Shugborough Hall Estate on the bus.

By the time the plan was formed, we realised we wouldn't have time to explore the mansion house (above, built by the Anson family in 1624 and enhanced by the great Admiral Anson in the mid 18th century) or the working Georgian farm, but there was just enough time for a walk around the grounds.

These aren't to be sniffed at; as Michael Raven says in his A Guide to Stafforshire & The Black Country, The Potteries & The Peak: 'It is for the Park Ornaments that Shugborough is famous. These are a collection of mostly Classically inspired buildings scattered around the grounds at strategic points, and whose purpose was simply to delight the eye.'

Delight us they did. Below are some snaps I took of The Shepherd's Monument, a puzzling ornament built around 1748 which takes its name from the marble relief based on a painting by Nicholas Poussin. Check out the strange eight-letter inscription on the base (see bottom, or check out the wiki page for a clearer image). 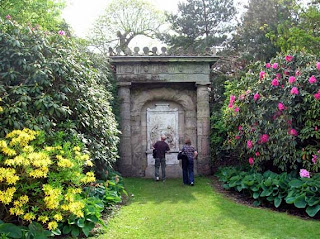 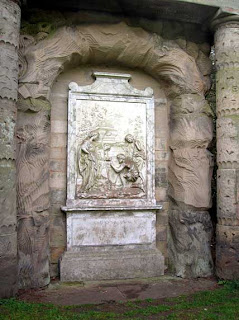 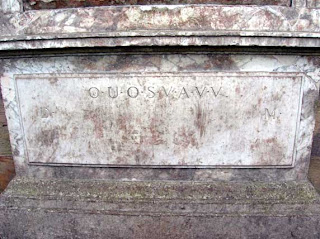 Nobody seems to have decoded it successfully (Josiah Wedgwood, Charles Darwin, Charles Dickens and codebreakers at Bletchley Park all had a go) and there's been rumours that it has a Holy Grail connection, though I'm not convinced. Answers to woffington [at] gmail [dot] com please :)

Next up was the Chinese House (below). This was completed in 1747, built on an island in an artificial canal and reached by a pair of bridges (though this was altered in 1795 because of the re-routing of the River Sow). The design for the Chinese House was taken from sketches made by Sir Percy Brett, who accompanied Admiral Anson during his circumnavigation of the globe. It's one of the earliest examples of the 18th-century fashion for Oriental design and has a gorgeous interior painted in blue and gold. 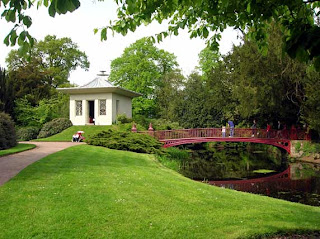 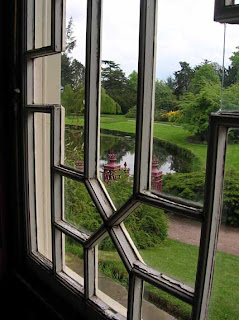 That's all for now, but don't go away because I'll be blogging on The Cat's Monument and The Ruin next!

Those grounds look like fun to explore! Are those cows in the top picture? I wish there was something like that around here.

Yes they are trying to restore the ha-ha so that you have the original view of the house (and cows!) It looks like a classic Georgian vista.