Next on our tour of the grounds of Shugborough Hall was The Cat's Monument (below, c. 1750-1775), designed by Thomas Wright of Derby and thought to commemorate a cat that travelled around the world with Admiral Anson (the cat is perched right on the top with his tail curled upwards). It reminded me a lot of those mock heroic poems of the period about cats, like Gray's On The Death Of A Favourite Cat, Drowned In A Tub Of Gold Fishes or Stockdale's An Elegy on the Death of Dr Johnson's Favourite Cat. 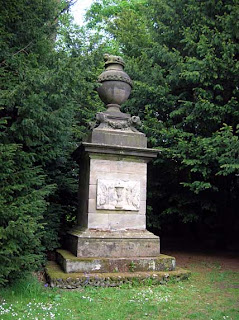 I think this classical folly, The Ruin (below), was probably my favourite though. It was a clever recycling project, built around 1750 from stone from sections of the Hall pulled down during alterations. Originally it was more extensive and included a pigeon house and classical colonnade, though they were destroyed by floods in the late 18th century. I love the fact that there's a Druid sitting on the top! 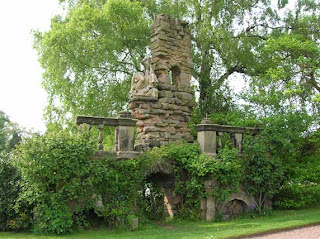 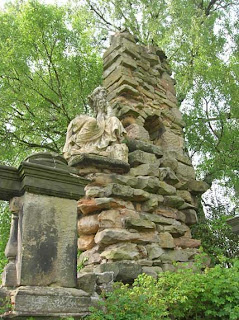 Next: Tower of the Winds.