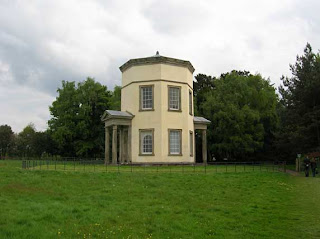 Well, after a busy week I've finally got time to conclude our Shugborough visit of last weekend. Above and below are shots of the Tower of the Winds, completed in 1765. It's usually open until 4.30pm, but despite leaping on the miniature railway to comically chug just a few metres down a bridle path, we found the doors locked.

It's a replica water clock which was once used as a dairy by Lady Anson (the 1st Earl of Lichfield was supposed to have had a gambling den upstairs) and was originally surrounded by a lake, with bridges reaching to the porches. There's a fantastic drawing of it as it once was here. 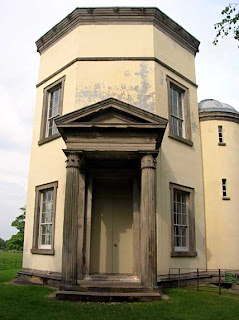 It's based on the original Tower of the Winds in Athens, which, given my boasting about The Classical Language of Architecture I should have recognised straight away as Greek Revival (a much less embellished style altogether). As Summerson says in that book: 'The first Greek Doric buildings built in England were built more or less as curiosities, exotic souvenirs, in the form of temples and porches on gentlemen's estates' - this is a perfect example.

Oh, and we couldn't pass by the tea rooms without stopping for some fantastic chocolate courgette cake (below, foreground), which concluded our trip nicely. We'll be back some other time to check out other parts of the park that we missed: the Lanthorn of Demosthenes, The Triumphal Arch and The Doric Temple. 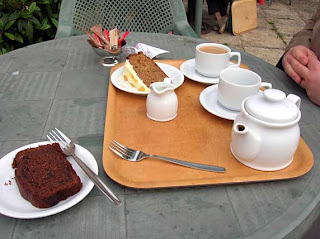 Photographs © Memoirs of the Celebrated Mrs Woffington.
PS for those interested in the Shepherd's Monument
there's been some more news this week about supposed Holy Grail connections. All a bit far-fetched Dan Brown nonsense if you ask me :)

What an absolutely cool adventure! I love the photographs. Kudos for sharing.

Thank you! So glad you liked them; hope to get back there for more adventures soon.