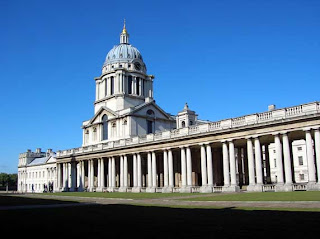 Thanks to London Midland's £15 deal for a return ticket to London, it seemed rude not to visit the capital on Bank Holiday Monday (especially as it was sunny there and cold and wet in Lichfield). So we headed off in the direction of Greenwich, bound for The Fan Museum, where my patient boyfriend was going to endure several hours learning about the ceremonial and decorative uses of the fan. However, as we rocked up on Crooms Hill we realised that the museum was, indeed, closed on Mondays. 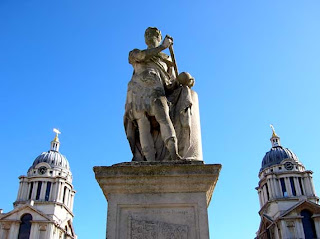 Never mind; Greenwich isn't short on historic treasures, one of the greatest being the Greenwich Hospital, founded in 1694 as the Royal Naval Hospital for sailors, with its ornate chapel (top) and the famous Painted Hall, where (in 1806) Lord Nelson's body was laid in state before being taken up the river Thames to St Paul's Cathedral. The architecture alone is absolutely stunning; above is a statue of George II which stands in the Grand Square.

I wasn't quite prepared for the grandeur and beauty of the Painted Hall (1707-27, see below). It was originally intended to be the hospital's dining hall, but by the time the artist James Thornhill had finished with it - painting an elaborate trompe-l'œil interior that would be 19 years in the making - it had become too much of a major tourist attraction and was used, instead, to raise funds for the Hospital. Thornhill, you will remember, was Hogarth's father-in-law and his ‘great and laborious undertaking’ at Greenwich earned him a knighthood. 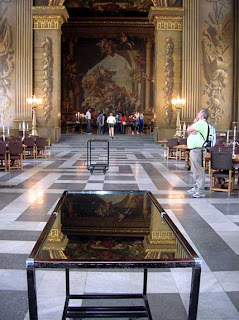 Check out the use of mirrored trolleys (above) to help you study the detail in the ceiling (below). 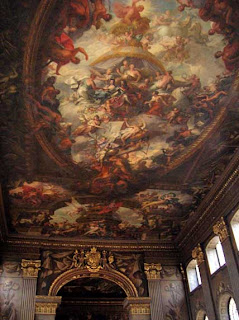 We laid our hands on a facsimile copy of An Explanation of the Painting in the Royal Hospital at Greenwich, written by Thornhill himself, and it's a very detailed analysis. For instance he describes the section pictured above in the following terms: 'In the middle of the great oval, under a canopy of State, and attended by the four cardinal virtues, are King William and Queen Mary, Concord fitting between, Cupid holding the sceptre, while King William presents Peace and Liberty to Europe and tramples on Tyranny and Arbitary Power.' 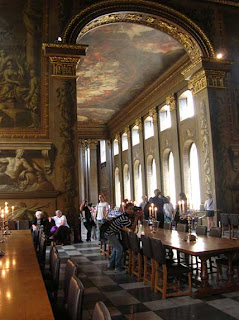 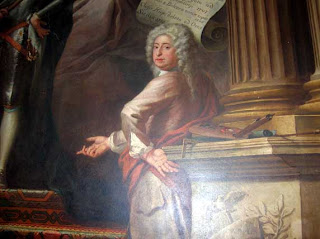 We went up the steps to the Upper Hall (top) where we were presented with the scene of 'the Accession, or the landing of King George at Greenwich'. A glance at the bottom right of the scene, at eye level, revealed Thornhill's self-portrait (bottom), his paints and brushes temporarily abandoned on the base of a nearby pillar. It was in this area of The Painted Hall that Nelson lay in state (the walls were draped with black fabric and anything between 15,000 and 30,000 people paid their respects). Here I am (below) standing on the very spot. 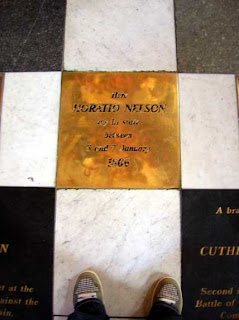 Next, I'll tell you about Greenwich Hospital's chapel: an 18th-century gem designed by Wren and Ripley and rebuilt by James 'Athenian' Stuart in 1779.

Fabulous. Thanks for sharing, tho I am sad you did not get to see the fan museum.

Thank you Vic - my boyfriend also wanted to see the National Maritime Museum and that closed before we got a chance to see it too, so we intend to go back and catch The Fan Museum at the same time.