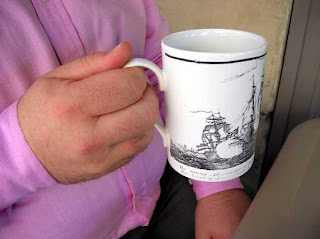 What started me thinking about frog mugs was a trip to the National Maritime Museum's shop, where my boyfriend bought a replica of a creamware frog mug in the museum's collection, with a design on the outside depicting the Battle of the Trafalgar (above). It's inscribed 'Lord Nelson/Engaging the Combin'd/Fleets of Cape/TRAFALGAR', 'The young Alexander of France/May boast of his prowess in vain/When Nelson appears tis confest/That Britains are Lords of the Main'.

In case you're not familar with the frog mug tradition, this drinking vessel (also sometimes called the 'surprise mug' or 'toad mug') has a miniature ceramic frog modelled on the inside, so that when you drink the liquid you get the shock of your life as the critter emerges from the depths. 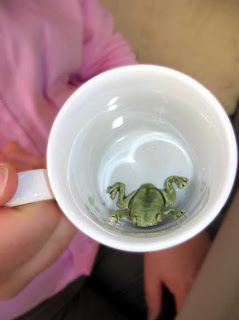 Some sources say the mugs were originally made in Liverpool and Sunderland where they were used in taverns frequented by sailors - but how old is the tradition? I wondered if the frog mug was particularly popular in the 18th century because of its anti-French overtones; after all, English sailors of the Trafalgar period frequently referred to Frenchmen as 'Monsieur Johnny Crapaud' [crapaud=toad]. One mug even has the inscription:

May England's oak,
Produce the bark,
To tan the hide Of Bonaparte.

A bit more history here (and my apologies to any French readers!)

"May England's oak,
Produce the bark,
To tan the hide Of Bonaparte."

Thank you Halldor. Here's an interesting addition to the post (which I didn't have time to write yesterday), from Trafalgar: An Eyewitness History:

'Some would be offering a guinea for a glass of grog, whilst others were making a sort of mutual verbal will such as, "If one of Johnny's Crapeau's shots knocks my head off, you will take all my effects; and if you are killed and I am not, why, I will have all yours."'

how interesting! I had no idea of the history of them! I deigned one of these for the company I work for, except the frog is flashing a peace sign hahaha...perhaps still French!?

Some pretty designs alright. Doing the painting yourselves is more fun but a good place for ideas for more design is this site of wahooart.com, that I use to help with my wall decorations.
You can browse for a painting like this The tree, by 20th century Czech artist, Frantisek Kupka, for example, http://EN.WahooArt.com/A55A04/w.nsf/OPRA/BRUE-8LHUQV , that can be ordered on line and delivered to you.