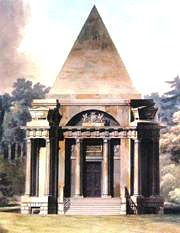 Having a sift through The Georgian Group’s website, I was heartened to read about the Darnley Mausoleum in Kent – abandoned, then virtually destroyed when kids lit a bonfire inside it in 1980 – but now lovingly restored by Cobham Hall Estate, with funds from The Georgian Group and Union Railways.

I have an interest in the earls of Darnley, particularly the second earl, Edward Bligh (who was one of Mrs Woffington’s lovers). Like the Darnleys before him, when Edward died in 1747, he was buried in Westminster Abbey. Later in the century, with the Darnley vaults full, the third earl, John Bligh, left instructions in his will for the construction of a mausoleum in Cobham Park. The contract was given to James Wyatt and the mausoleum completed in 1786, though oddly, never consecrated (see above for one of Wyatt's drawings). The Telegraph has an article and some beautiful pix showing the transformation.

How different the plight of Little Green Street, off Highgate Road in Kentish Town, which is one of only a few intact Georgian streets in London, but is to be turned into a truck route by developers, who wish to build on an adjacent plot of land (a real problem when the street is only 2.5m wide!) Despite opposition from tens and thousands of people, the national Government's agency determined that construction can go ahead, and the only thing stopping them is the current financial crisis! Thanks to Jane Austen World for flagging this up. What Little Green Street needs now is a miracle…