On Not Being Served 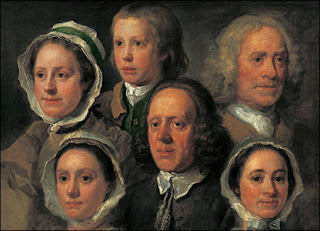 Servants were nothing but trouble in the 18th century: or at least, that's what the literature of the time tells us. A passage from Boswell's Life of Johnson concerns the dirty habits of French servants (as described by Johnson):

"At Madame ----'s, a literary lady of rank, the footman took the sugar in his fingers, and threw it into my coffee. I was going to put it aside; but hearing it was made on purpose for me, I e'en tasted Tom's fingers. The same lady would needs make tea à la Angloise. The spout of the tea-pot would not pour freely; she bade the footman blow into it. France is worse than Scotland in every thing but climate."

Strong words when you consider how much Johnson complained about Scotland! Footmen were also viewed dubiously in Jonathan Swift's hilarious Directions to Servants: a kind of primer in which he addresses sardonic advice to each servant in the household. To the footman:

Take off the largest dishes and set them on with one hand, to show the ladies your vigour and strength of back, but always do it between two ladies, that if the dish happens to slip, the soup or sauce may fall on their clothes and not daub the floor... When you carry up a dish of meat, dip your fingers in the sauce, or lick it with your tongue to try whether it be good and fit for your master's table... If you are ordered to break the claw of a crab or lobster, clap it between the sides of the dining-room door between the hinges...

Above is William Hogarth's wonderful Heads of Six of Hogarth's Servants (circa 1750-5).