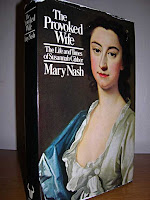 I felt a bit bad about my Handel in the nude posting, so to make it up to him, I'm giving a shout-out to the Messiah, and the intriguing news that Stephen Fry is supposed to be making a biopic about the composer.

Now, I don't know much about this project, but I'm assuming that the screenplay will be drawing on an amazing book (sadly, out of print) by Mary Nash called The Provoked Wife: The Life and Times of Susannah Cibber. I acquired my copy (left) ages ago and talk about a blockbuster! It charts the sad, scandalous and, at times, downright bizarre, events in the life of this 18th-century actress and was so gripping I bored my boyfriend endlessly by reading huge sections out to him.

Anwyay, most of the book is devoted to Susannah's disastrous marriage to actor Theophilus Cibber and the celebrated 'alienation of affections' trial, but it also gives a touching portrayal of her relationship with Handel and her involvement, as a singer, with the premiere of the Messiah. Despite being pretty uncompromising, Handel actually reset several arias for Mrs Cibber's untrained voice and wrote He Was Despised especially for her (this was based on declamation rather than cantabile, which was easier for Cibber to sing). He clearly liked her tender, melancholy voice, and her expressiveness.

And of course, her shocking back-story brought that extra frisson to the Messiah's debut, and explains why, when she had finished singing, a tearful audience member cried out: 'Woman, for this all thy sins be forgiven thee!'